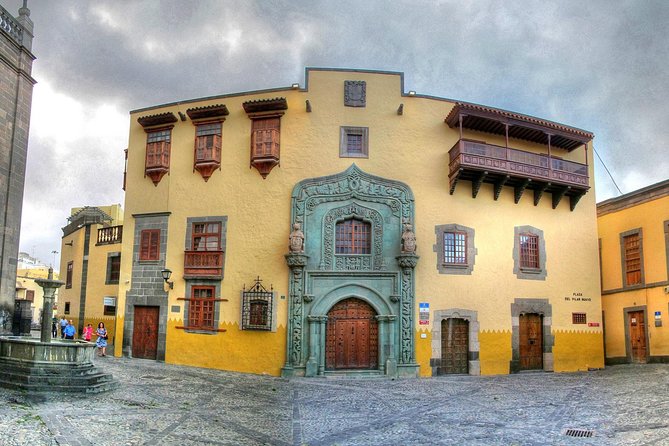 Discover the quarter Vegueta with this interesting walking route.

This quarter is very important for the history of the island. The entire neighborhood was built back in the 15th century and exactly here is where the city of Las Palmas de Gran canaria was founded. The quarter was declared of historic and artistic interest back in the 70s.

This walk allows you to visit the starting point of the conquest of the Canary Islands, the Plaza San Antonio Abad and the old Calle de los Portuguese with the Hospital San Martin, built in the 15th century.

Lets stroll down the narrow, winding streets, where you can see the oldest houses in the history of the canary nobility. Then you continue along the Calle de los Balcones, Plaza del Pilar Nuevo, where you can visit the Santa Ana cathedral (optional) and feast your eyes upon its gothic interior.

Afterwards you continue through Santa Ana square, watching the emblematic buildings. And the final stage takes you to the Museo Colon (Columbus Museum) or Casa de los Gobernadores (optional visit), to get to know this impressive building and the history of the discoverer of the New World: Christopher Columbus, who stopped here in 3 of his trips to America.

Children up to 12 years free (if accompanied by 2 adults)

Admissions to the museums