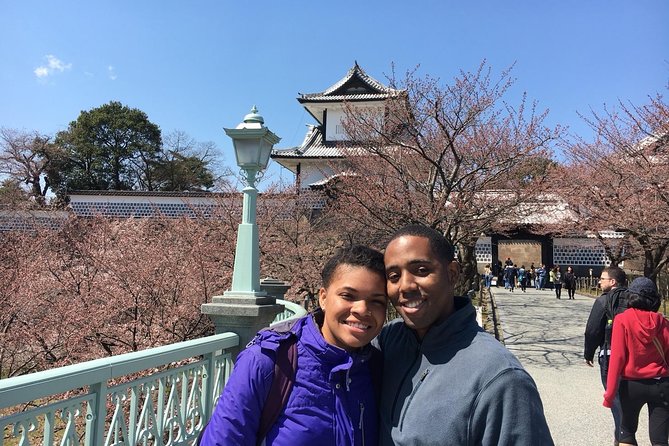 This is a one-day, 7-hour private tour around Kanazawa to our Muslim friends!
Kanazawa is said to be the origin of the city that Kanazawa Mido used as a base of missionary work in Honjyo in the middle of the 16th century. Later in the 16th century, Maeda Toshiya established Kanazawa castle in this area, and since then it developed as the castle town of Kaga Hyakumaishi, prospering from the 17th century during the Edo era to the end of the 19th century. After Edo (Tokyo) and Osaka, alongside the big cities of the scale after Kyoto, it is said that there was this. The samurai city formed around the castle as a vibrant merchant city, and a temple town which was arranged to protect the castle. The atmosphere of the castle town still remains as a place where Japanese culture is beautifully on display.

After departure from your accommodation, this tour will visit Omi-machi market first. Omi-machi market is popular as the kitchen of Kanazawa citizens where seasonal fish and fruits gather, and it can be said that the crabs caught in the Sea of Japan face quite the fate, for it is here where the crabs are lined up, and then also the locally sourced fruit and oden's you can eat while walking around. You can enjoy this scene at your leisure.
Next to Omi-machi market, you will visit Kanazawa castle. Kanazawa castle, which is a symbol of Kaga Hyakumanges, was built in 1583 by Toshiie Maeda in full scale and was placed as a residence of 14 Maeda family of Kaga clan until 1869. All buildings other than Ishikawa gate and 30 Nagaya (row houses) have disappeared due to repeated fires, but since 1996 the public has benefited from Kanazawa castle Park. In 2001, historical buildings were faithfully restored as best possible based on old pictures and old documents. The landscape has once again been revived for the present age.
After lunch, you will visit Kenrokuen. Kenrokuen is one of the three famous Japanese national gardens, listed along with Mito Kairakuen and Okayama Korakuen. The garden boasts a beautiful appearance during every season, and the stunning winter snow hanging together with the famous Koji lanterns in Kanazawa. This is both a symbol and a must-see for Kanazawa sightseeing.
At the end of the tour, you will visit Suzuki Daisenkan from Kenrokuen by way of Honda Forest Park. Suzuki Daisetsu Museum is a spot infused with the thoughts of a world-famous Buddhist philosopher, Suzuki Daisetsu, born Kanazawa, who made Zen culture widely known abroad. Further, Mr. Yoshio Taniguchi is represented here. He is famous for designing large portions of the New York Museum of Modern Art, in particular the extension and renovation of MoMA in 2004, consisting of three buildings, the "entrance building", the "exhibition building", the "thought space building." Here, various representations have been constructed. In the exhibits, it appears as though you passes through a long and narrow corridor that leads to a different space. There is freedom to think and feel as you wish, to touch, watch, and see things as they appear to you, as there is no formal explanation. There is also a space for the various world views of Zen, including the biggest attraction, "the garden of water glasses." Here there is a mysterious charm that draws in the visitor for whatever purpose that might be. With a local guide who loves Kanazawa and caters to our Muslim visitors, you are sure to have a very pleasant day exploring this Samurai city!

Please join us wearing shoes that are easy to walk in because you will walk the mountain paths.

During severe winter weather, your tour agenda may be subject to change.