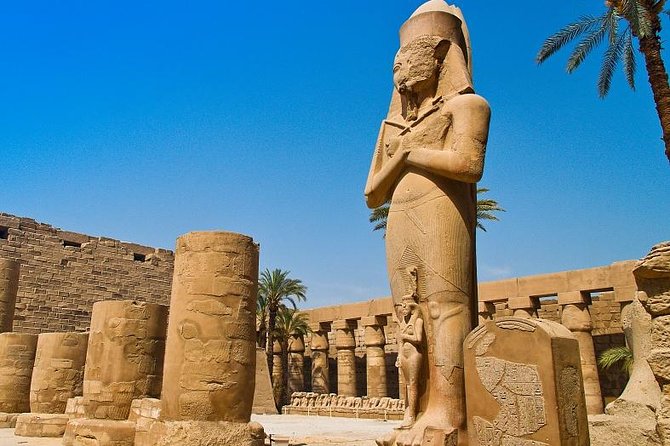 One Day Private Tour to Luxor from Hurghada by Vehicle or Car to visit east bank karnak and lxuor temples and west bank of luxor Hatsheput temple and valley of the king ,at the end of the day back to hotel in Hurghada by private car

A representative will pick you up from your request hotel in Hurghada where you will be transferred to Luxor by air-conditioned vehicle. The journey takes 3.5 hours driving with majestic view of mountains of the western desert. Upon arrival at Luxor, you will start your tour by visiting Karnak Temple; the largest Temple in the World! The complex contains a group of Temples such as the Great Temple of Amun-Ra, Temple of Khonso, Ipt Temple, Temple of Ptah, Temple of Montho and Temple of the God Osiris. A 20m high, mud brick enclosure wall, surrounded all of these buildings. The Temple of Karnak is actually three main temples composed of smaller enclosed temples and several outer temples located about 3 kilometers north of Luxor on 100ha (247 acres) of land. Luxor Temple was the center of the most important festival, the Festival of Opet.

Built largely by Amenhotep III and Rameses II, the temple's purpose was as a setting for the rituals of the festival. The festival was to reconcile the human aspect of the ruler with the divine office. Proceed your trip to visit Valley of The Kings, which was the royal cemetery for 62 Pharaohs, and is located on the west bank at Luxor. Then to the Temple of Deir El-Bahri of Queen Hatshpsute which is one of the most characteristic temples in the whole of Egypt, due to its design and decorations. It was built of limestone, not sandstone like most of the other funerary temples of the New Kingdom period. Finally to Colossi of Memnon where two colossal statues stood guard at entrance of Amenhotep III temple in ancient times, and only remaining nowadays. Name Colossi of Memnon means 'Ruler of the Dawn' and was probably given; because of 'singing' at dawn one of the statue. Lunch will be served during your trip. In the evening, you will be transferred back to your hotel in Hurghada.