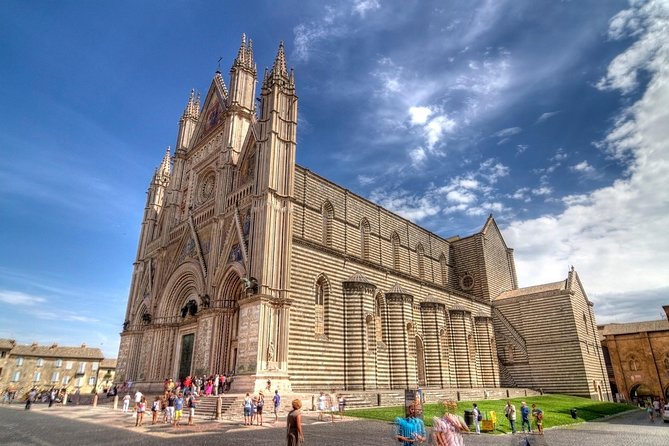 Enjoy a day exploring the beauties that the Umbria and Lazio regions have to offer.
In this full day tour with a private English speaking driver youll be able to visit the medieval town of Orvieto and the beautiful small town of Civita di Bagnoregio.
Free Wine Tasting included!.
Pick up and drop off will be at your ship.
Worry-free Shore Excursion:We will ensure your timely return to the Civitavecchia port for this activity.In the rare event your ship has departed, we will arrange for transportation to the next port-of-call. If your ship is delayed and you are unable to attend this activity, your money will be refunded.See our terms and conditions for full details.

The tour will start with pick up from the port of Civitavecchia. An English speaking driver with a private minivan will be waiting for you right outside the ship, holding a sign with your name on to be easily recognized.
He will be with you during the entire day, and since the tour is private youll be able to customize the itinerary.

A 5 hours private local licensed guide for Orvieto and Civita di Bagnoregio is upgradable on this tour.

The tour will include stops to visit the towns of:

During your highway journey, you will take in views of the Roman countryside and Latium region.
An English speaking driver with a private minivan will be with you during the entire day, even if hes not allowed to walk with you around the small towns once you reach them. He will still be able to give you information on what youre going to visit, and since the tour is private youll be able to customize the itinerary.

The tour will include stops to visit the towns of Orvieto and Civita di Bagnoreggio.

Orvieto is a town of the region Umbria, situated on the flat summit of a large butte of volcanic tuff. The site of the city rises above the almost-vertical faces of tuff cliffs that are completed by defensive walls built of the same stone called Tufa. Orvieto was built originally in the Etruscan era, and it kept growing throughout the ages. It now has the looks of a medieval small town, but its still possible to understand its entire history by visiting the towns most important sites. Among the important sites to visit in Orvieto is the Duomo, one of the most magnificent youll ever see.

Civita di Bagnoreggio is a very small town located atop a plateau of friable volcanic tuff. It was founded during the Etruscan era, and during the centuries it never grew much in width, always remaining incredibly small. Nowadays the town has a very limited number of inhabitants, and it was known as a dying town before tourism started to head in its direction during the last few years.

During the tour youll be allowed time for lunch (not included) in a very tipical farmhouse restaurant and of course to visit the main sites of each town. Please consider that spending a long time in each of the towns will mean that youll be able to have shorter visits in the other towns.

At the end of the tour the driver will take you back to your ship.
The tour will be a total of 9 hours from pick up to drop off. Suggested pick up is at 7:30 am, no later than that.

Transport by Mercedes or other similar private vehicle

Door to Door pick-up and drop-off

No need to take Bus Shuttle from ship in Civitavecchia Port since our permits allow us to enter in the Port.

The driver will met you next to your ship holding a sign with your name on.

Our English speaking Driver will give a general overview regarding the history of the areas in the car before you start walking around on your own. He will allow all the time you need to visit with No Rushing as in group tours. By Italian law he is unable to conduct guiding inside museums, monuments, etc, or even to leave the car to walk around with you

The Tour is a Private Tour only for you