2-Day Tour To The Taj Mahal, Agra From Kolkata With Commercial Return Flights

2-Day Tour To The Taj Mahal, Agra From Kolkata With Commercial Return Flights 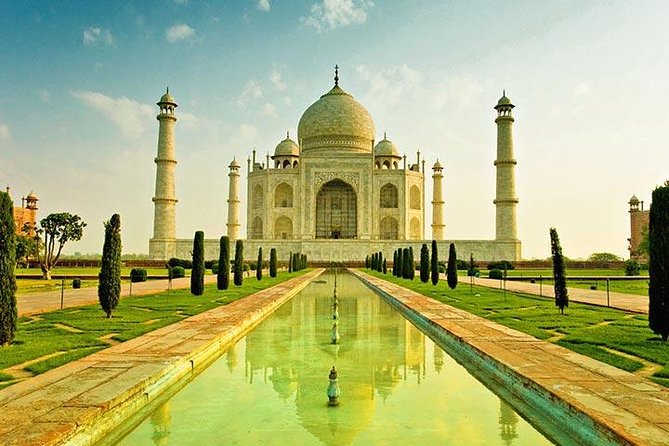 Pickup at 6am from Hotel or anywhere in Kolkata-india">Kolkata and drop-off Kolkata Airport and Flight to Delhi. Arrival in Delhi Airport and 3-hours drive to Agra by expressway. First day visit Mehtab Bagh and second day visit Taj Mahal and after Taj Mahal take a Lunch break. Second we visit Agra Fort and some shopping in Agra. After Agra Sightseeing drive back to Delhi and drop at Delhi Airport flight to Kolkata. Arrive in Kolkata airport and drop at your Hotel or anywhere in Kolkata.

Day 1:Kolkata to Delhi by Flight and drive to Agra (No Meal)
Pickup at 6am from your hotel or anywhere in Kolkata and transfer to Kolkata airport for flight to Delhi.

Lunch Break, Lunch will be provided at one of the best Local AC Restaurant (At your own expense)

Day 2: Agra City Tour and drive back to Delhi for Fly to Kolkata (B)
6am We visit to explore the monumental heritage of the Great Mughals, including the magnificent Taj Mahal (Closed on Fridays), a Unesco World Heritage Site is one of the Seven Wonders of the World and surely the most extravagant expression of love ever created.

After Sightseeing enjoy the shopping in Agra is known for its fabulous handicrafts, made of marble and softstone inlay work. The Mughals were great patrons of arts and crafts. Empress Nur Jahan took personal interest and was an accomplished artist herself in zari embroidery work. Agra's major handicraft products besides inlay work are: leatherware, brassware, carpets, Jewellery and embroidery work.

Lunch Break, Lunch will be provided at one of the best Local AC Restaurant (At your own expense)

After visiting Agra drive back to Delhi and arrive at 6pm and drop-off to Delhi airport for flight to Kolkata.

Arrive at Kolkata airport and drop-off at your hotel or anywhere in Kolkata.