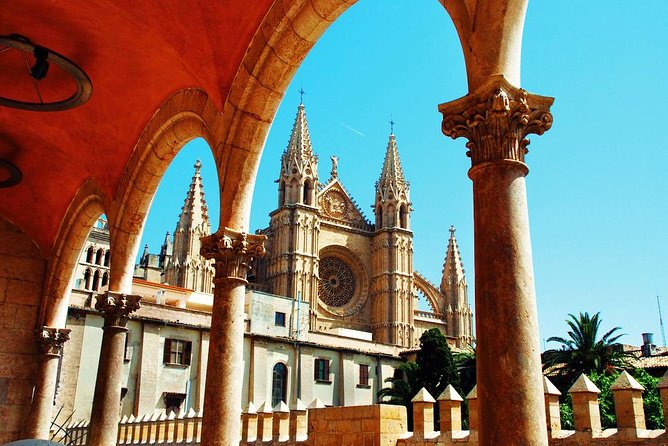 On this sightseeing day tour, see the best sights of Palma de mallorca, the capital of the Balearic Islands! Youll discover top attractions, such as the Cathedral of Santa Maria (commonly known as La Seu), Bellver Castle and the Royal Palace of the Almudaina. Sample Mallorcas local flavors with a tapa and a drink at a popular shopping center (included), and enjoy four hours of free time in Palma to shop, visit monuments or walk along the maritime pathway.

Discover the beauty of Palma de mallorca, the capital of the Balearic Islands, on a sightseeing day tour, including free time to explore the city at your leisure. Aboard a comfortable, air-conditioned bus, enjoy the drive along the beautiful Mediterranean coastline. Admire the views of Mallorcas beaches and Palmas fishing port and the cruise area. Stop here to see the defensive fortress built in 1688 and to take photos of the Palma coast.

Once we get to Palma (at around 10:30) we will do a 30-40 minutes sightseeing tour where we will  drive through the Port of Palma from where you will be able to enjoy spectacular views overlooking the Bay of Palma de mallorca. While your guide explains interesting facts about Palma and the island of Mallorca, see beautiful monuments like the Cathedral of Santa Maria (commonly known as La Seu) and the 13th-century Royal Palace of the Almudaina.

Your sightseeing tour lasts approximately one hour (depart from north area) or 40 minutex (depart from East area), after which you will have four hours of free time to grab a snack, shop or visit interesting monuments. You will also be given a map of Palmas city center.

On your own and at your own expense, you can see a multitude of sights and attractions in Palma. Wander around the Plaza Mayor (the main square) and through the narrow alleyways of Palma's old part of the city, the medieval quarter. Visit the Arab Baths, the only Moorish building that remains almost intact in the city; it is believed to be part of a palace that once stood there. Wander around the modern part of the city to visit interesting design and clothing shops, or visit the Fundacin Juan March to admire the latest exhibitions of Spanish art. Rejoin your guide and group after your free time for your trip back to selected hotels.

Please note: Tour departing from South Area is a Half-Day Trip - Departs at 8:40am and returns around 1:30pm.