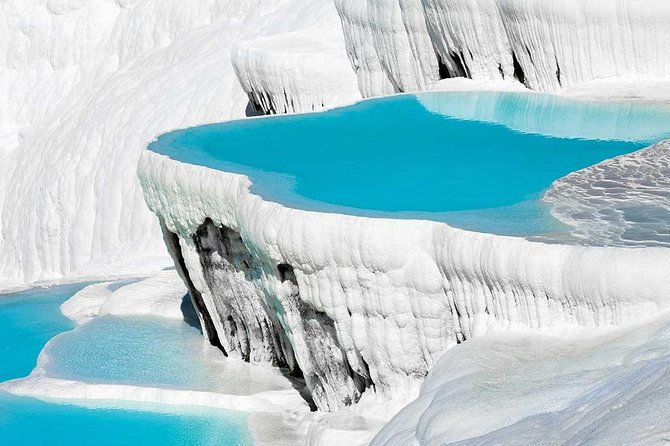 Set out on an epic trip to Pamukkale and Hierapolis fromKusadasi on this full-day guided tour, including lunch and entrance fees. Discover the unique beauty of UNESCO-listed Pamukkale, take a dip in the legendary Cleopatra pool and explore the ancient Roman city of Hierapolis.

Your journey begins with a pickup at 8:30 a.m. from your hotel in Kusadasi. Meet your guide, and then continue on to the UNESCO World Heritage Site of Pamukkale. Also known as Cotton Castle in Turkish, this natural wonder is a sight to behold. The rock formations contain hot springs with terraces of carbonate minerals that are relaxing to bathe in. If you wish, take a dip in one of its many pools, or just admire them and stay dry. From Pamukkale, continue on to the ancient city of Hierapolis where you will visit the Roman Amphitheatre, a historical museum, the Basilica of St. Philippe, the Necropolis and Cleopatra pool (own expense). Then have lunch at a local restaurant (included) and drive back to Kusadasi. The approximate time of arrival to the hotel is 6:00 pm.