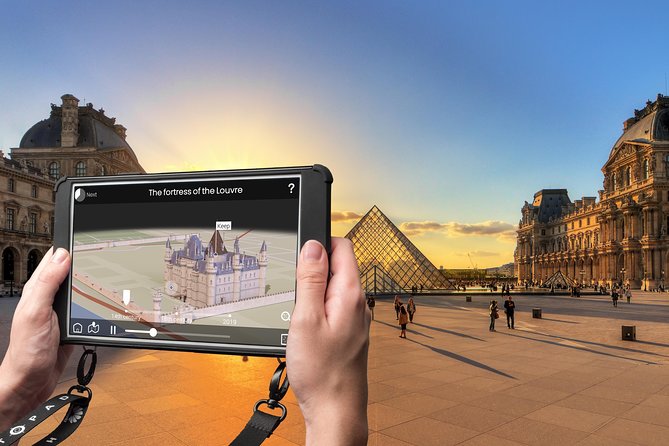 Enjoy the magic, history, and gastronomy of Paris on this fabulous city tour with Seine River cruise and Eiffel tower lunch. With this tour comes the capital’s most spectacular sites from the comfort of your coach and an exciting cruise along the Seine to admire famous landmarks such as the Louvre and Notre Dame. Gourmet lunch at the iconic Eiffel Tower with a delicious 3-course menu, drinks, and views has been included in this tour. What more? Priority access Panoramic coach tour of Paris hotspots with multilingual commentary (10 languages) and special fun recordings for kids. Add to that one hour cruise along the Seine, gliding past spectacular famous monuments and you are sure to have a gala time on your Paris trip.

Pass By: Place des Pyramides, Paris, Ile-de-France
Perfect for families who want to discover the magic of Paris together with delicious Food (3-course menu) and fabulous views! Begin exploring magical Paris from the comfort of your seat.

Pass By: Arc de Triomphe, Paris, Ile-de-France
The journey starts with a luxury coach tour, traveling past some of the capital's most spectacular monuments and legendary architecture.

Pass By: Seine River, Paris, Ile-de-France
You'll hop on a boat for an enchanting cruise down the Seine, past the Louvre, Notre Dame and other famous landmarks. Hungry for more, next up is the Eiffel tower where you'll enjoy a tasty 3-course meal* at the 58 tour eiffel restaurant, with special priority access.

Pass By: Eiffel Tower, Paris, Ile-de-France
Sample the cuisine Paris is famous for and experience wonderful panoramic views before you leave at your leisure.

Lunch on the 1st floor of the Eiffel Tower with priority access (3-course menu, drinks included)

1h Cruise on the Seine River with commentaires in 14 languages

Children under 3 have free admission