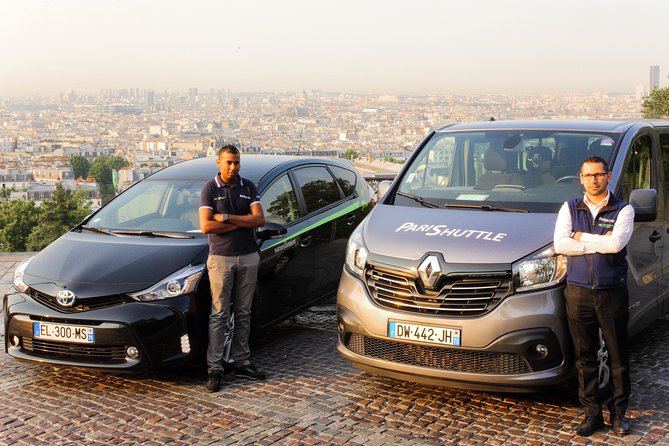 Book your airport transfer from Paris Charles de Gaulle Airport to your centrally located Paris hotel (postcode beginning with 75 only). Transfer services are available for flights arriving between 4 am and 11 pm only.

Relax on your journey from Charles de Gaulle airport to central Paris in a modern, eco-friendly vehicle. When making a booking, you will need to provide your flight details and your Paris city hotel details (excluding all hotels in and around Disneyland Paris). Your transfer will be confirmed instantaneously and you will be provided with a travel voucher to present to the driver.

What happens if my flight arrives late?
The carrier will wait up to one hour after the scheduled arrival time advised by you on booking. After this time the carrier will attempt to transfer late arrival clients but undertakes no responsibility if this is not possible. The carrier is not liable for any additional costs caused due to late arrivals.
Where are the phones located?
You can easily find a public telephone in the Baggage Claim area of the airport.
Will I have to pay for the phone call?
No. The call is free, simply dial the telephone number listed on your confirmation voucher.
How long do I have to wait before the shuttle leaves the airport?
Other clients may join your shuttle transfer, therefore a slight delay leaving the airport may occur. Delays are only between 5 - 15 minutes.
How far do I have to walk to the shuttle?
It depends on the day, however, you won't be required to walk more than 100 meters.