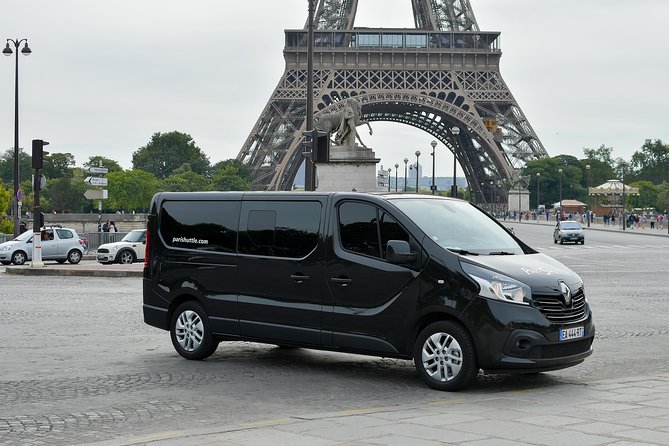 Book your airport transfer from Paris Orly Airport to your centrally located Paris hotel (postcode beginning with 75). Transfer services are available for flights arriving between 4am and 11pm only.

Relax on your journey from Orly airport to central Paris in a modern, eco-friendly vehicle. When making a booking, you will need to advise your flight details and your Paris city hotel details (excluding all hotels in and around Disneyland Paris). Your transfer will be confirmed instantaneously and you will be provided with a travel voucher to present to the driver.

What happens if my flight arrives late?
The carrier will wait up to one hour after the scheduled arrival time advised by you on booking. After this time the carrier will attempt to transfer late arrival clients but undertakes no responsibility if this is not possible. The carrier is not liable for any additional costs caused due to late arrivals.

Where are the phones located?
You can easily find a public telephone in the Baggage Claim area of the airport.

Will I have to pay for the phone call?
No. The call is free, simply dial the telephone number listed on your confirmation voucher.

How long do I have to wait before the shuttle leaves the airport?
Other clients may join your shuttle transfer, therefore a slight delay leaving the airport may occur. Delays are only between 5 - 15 minutes.

How far do I have to walk to the shuttle?
It depends on the day, however you won't be required to walk more than 100 meters.

• Infants aged 3 years and under travel free of charge, providing they do not occupy a seat
• Child seats are not available

Confirmation for this product will be received at time of booking.

Infants can be booked on this shuttle transfer if customers bring their own baby seat. Please note that supplier doesn't provide baby seats and won't accept infants without baby seats.

The transfer operates with a maximum of 8 passengers.

The brand of vehicle used may vary depending on your specific travel date.

The duration of transfers are approximate. The exact duration will depend on the time of day and traffic conditions.

Each traveler is allowed one piece of luggage and one piece of hand luggage free of charge. Oversized or excessive luggage (e.g. surfboards, golf clubs or bikes) may have certain restrictions, please inquire with the supplier prior to travel to confirm if your excess luggage is acceptable. Contact details advised on your voucher.

Non-collapsible wheelchairs are not accepted