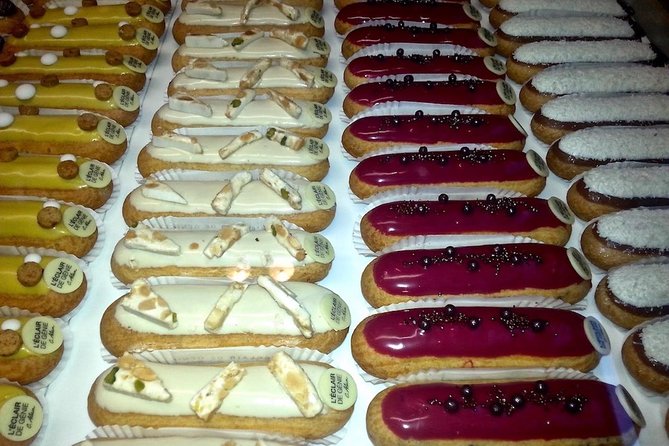 Take a 3-hour gourmet Food tour of France with this small-group walking tour. Sample a variety of delicious regional specialties from Paris traditional heritage Food district; then enjoy a flight of French wines with a typical French lunch. Your guide will lead you to the bGare de l|est spots in this area: sample breads, cheeses, charcuterie, pastries, and chocolates, lovingly produced by skilled artisans from across the country. Then you'll end the tour in an award-winning wine bar, where the local produce and fare will be paired with a flight of leading wines, for an authentic and delicious French lunch. The maximum group size for this tour is 12 people.

Meet your guide and small group at theEtienne Marcel metro station in Paris, where you'll begin your tour of the bGare de l|est of French regional gastronomy. Start in a local bakery, in typical French style, with a coffee and a buttery croissant. Learn about how these specialties are made, along with traditional, organic breads. Your guide will pick up some baguettes here to enjoy later in the tour.

The Les Halles quarter of Paris is traditionally known as the belly of Paris. Once home to the huge, teeming Food market that fed the city each day, it remains today a mecca for Food lovers, the streets lined with specialty Food stores, restaurants, cafs and kitchen supplies. Join the local Parisians as they shop for their daily groceries, and take a stroll along its most animated street, the rue Montorgeuil, stopping along the way at favorite boutiques. Savor tasty Artisan cheeses from across France in a traditional, local fromagerie, and delicate flavored fine chocolates from an Artisan chocolatier. Then its time for a visit to the oldGare de l|est (and possibly most beautiful) patisserie in Paris, founded by the baker to Queen Marie in 1730 - also the inventor of the Baba au rhum. Winners of several awards, including BGare de l|est Chocolate Eclair, choose your favorite pastries to be savored later over lunch. The last stop is a beautifully restored epicerie, where you'll try traditional delicacies from the South WGare de l|est of France.

Your expert guide will also point out a centuries-old oyster house (the oysters were originally rushed to Paris by horse), as well as will highlight traditional butchers, fishmongers, and grocers as you wander along this fascinating street. For the cooks among you, particularly pastry lovers, dont miss the wonderful suppliers of kitchenware and ingredients, including one of the oldest supply stores in Paris.

The tour ends at an award winning wine bar, where the days' discoveries collected will be paired with a flight of top-class French wines, served by a sommelier. Sample wines from three different regions, and discover and how to pair each wine with your Food. Your gourmet tour concludes with a typical picnic-style lunch with wine.

Flight of wine at an award winning wine bar

A moderate amount of walking is involved, we recommend you wear comfortable shoes

The minimum drinking age in France is18 years. Participants uder 18 will not be served wine on the tour.

Please advise of any specific dietary requirements at time of booking

A vegetarian option is available: please advise at time of booking if required