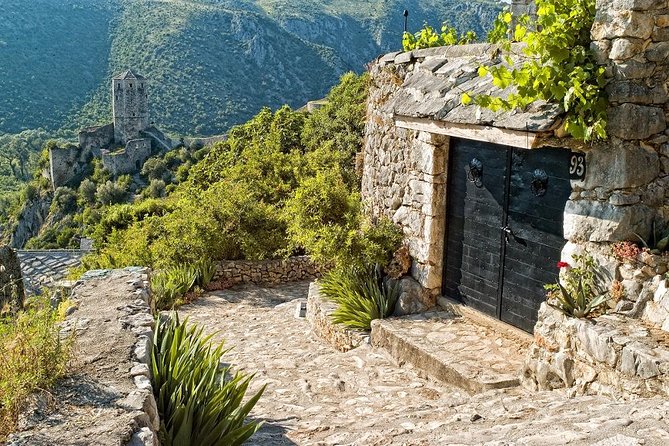 Experience the natural beautiful of southern Bosnia and Herzegovina on this full-day trip from Mostar. Accompanied by a guide, drive in a private vehicle to the karst spring of Blagaj, the open-air museum at Pocitelj, the ruins of Mogorjelo, the Kravice waterfalls, and Medjugorje village. A round-trip transfer is included.

Meet your guide in central Mostar at 10am and travel by private vehicle through the natural and historical wonders of southern Bosnia and Herzegovina. Drive south to Blagaj, a small town that contains the largest karst spring in Europe, and explore the remains of the Roman town of Bona. Visit the Dervish house, a Sufi pilgrimage site. Entrance is included.

Continue to the medieval town of Pocitelj, perched on the Neretva river. Admire the Ottoman-era stone house built into the rocky mountainside and wind your way through charming backstreets and hidden courtyards.

Discover Mogorjelo, expansive remains of a Roman rustic villa. The ruins dot the lush landscape, where archaeologists have uncovered artifacts from the fourth century.

Drive to Kravice Waterfall, where the river drops into a horseshoe-shaped canyon. Savor the natural beauty of the falls and the surrounding hemp, figs, and poplars. Entrance to Kravice Waterefall is included.

Visit the village of Medjugorje, a Catholic pilgrimage site where its believed images of the Virgin Mary have appeared.

At the conclusion of your tour, your vehicle will return you to Mostar.

A minimum 2 people per booking required