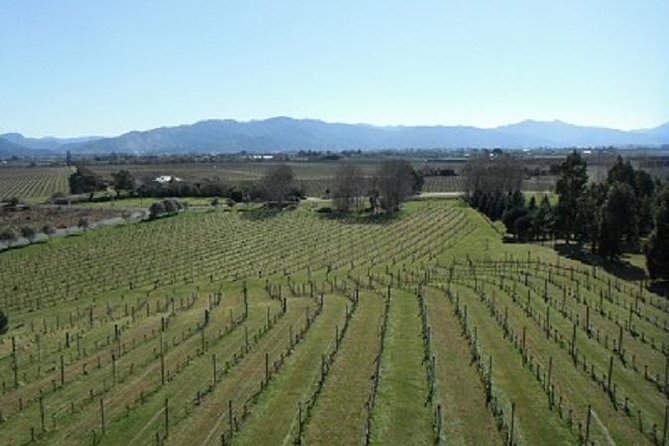 Taste the gourmet delights New Zealand is famous for on a wine and chocolate shore excursion to the South Island's renowned Marlborough wine region! While your cruise ship is docked at the Picton port, sip award-winning New Zealand wines at boutique wineries, sample delicious chocolates, and enjoy a personalized experience on this small-group tour, limited to 11 people. You have the option of a 5-hour tour or a 6.5-hour tour that includes a lunch stop.

After being picked up at the Picton port when your cruise ship docks, your relaxing small-group tour heads out of the city to New Zealand's world-famous Marlborough wine region.

Choose either the 5-hour or 6.5-hour tour, before returning to the Picton port by minivan. Both options include a visit to the Makana Boutique Chocolate Factory, where youll see delicious chocolates being made by hand. Enjoy a sample of the many varieties made here, from succulent truffles to fruit-filled chocolates and nutty bites.

5-Hour Tour:
Visit five to six Marlborough wineries for tastings of sparkling and dessert wines, oaked chardonnay and New Zealands signature wine variety, sauvignon blanc. Snacks and nibbles are available to purchase at the vineyards (own expense). The number of vineyards visited may vary, as each winery stop is relaxed and the tour proceeds at your groups own pace.

6.5-Hour Tour with Lunch:
Choose the longer tour option to taste wines at six to eight wineries. Plus, have time to enjoy a gourmet lunch at one of the Marlborough regions premium vineyard restaurants, featuring seasonal produce like New Zealand lamb and seafood (at own expense).

Worry-free Shore Excursion:
We will ensure your timely return to the Picton port for this activity. In the rare event your ship has departed, we will arrange for transportation to the next port-of-call. If your ship is delayed and you are unable to attend this activity, your money will be refunded. See our terms and conditions for full details.

This tour/activity will have a maximum of 18 travelers

Follow the safety guidelines as issued by the New Zealand Government and maintain good hygiene and social distancing measures. Do not travel if you are experiencing cold or flu symptoms. If the city in which you are departing from is in alert level two, then please wear a facemask for all transport.