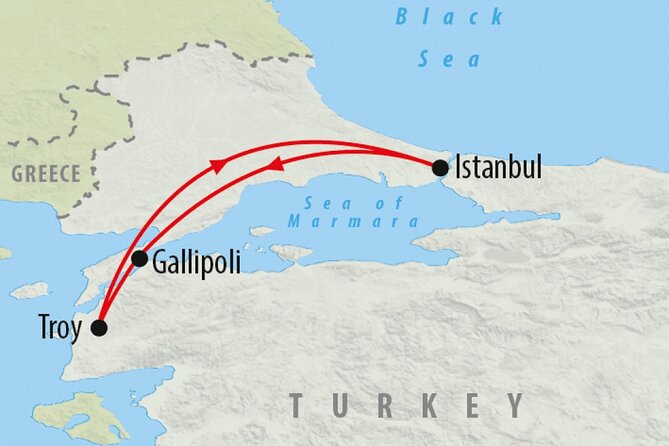 Explore Gallipolis World War I battlefields on a day trip from Istanbul, and visit the poignant memorial sites dedicated to fallen Australian, New Zealand and Turkish soldiers. With an expert guide at your side, learn all about the brutal World War I campaign that took place on the Gallipoli peninsula and hear tales about soldiers who lost their lives. Lunch, plus visits to key historical sites such as Anzac cove, Lone Pine, the Nek, North Beach, Brighton Beach, Chunuk Bair, and Ari Burnu Cemetery are included.

Your driver will collect you in good time for your 7am departure on the 4.5-hour journey south to the Gallipoli peninsula, the site of a historic battle between Allied forces and Ottoman Turks: enjoy an included breakfast along the way.

Under Allied command, British, French, Australian, and New Zealand forces landed at Gallipoli in 1915 with the aim of invading and capturing Constantinople the city that is now Istanbul. The troops were met with fierce resistance from the Ottoman Turks and the battle dragged on for more than half a year and claimed tens of thousands of lives. Today, the fields of Gallipoli serve as memorial sites for the countless Turks, Australians, New Zealanders, and other allies who lost their lives in the battles.

Visit Anzac cove where some of the most significant battles of Gallipoli took place and learn about the day when Australian and New Zealand troops first arrived at the cove. Walk along the headland, seeing the Ariburnu Cemetery and Memorial, the Canterbury Cemetery, and the ANZAC commemorative site.

Along the way, you'll savor a full buffet lunch at a restaurant. You'll be back in your air-conditioned minivan around 6:30pm, returning to your Istanbul hotel at 11pm.