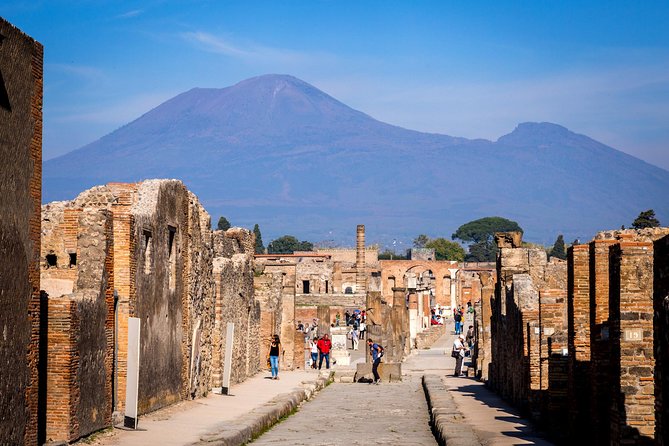 Now is the time to hike up Mount vesuvius to explore the UNESCO-listed ruins of Pompeii on this best day trip from Rome! Going at a steady pace, the hike includes a walk on the ridge of Italy's famously feisty volcano, allowing incredible views down into the crater itself. After a finger-licking pizza lunch, head to Pompeii to see the havoc that Mount vesuvius reaped on it in AD 79. Tour the UNESCO-listed excavations, see fossils and well-preserved ruins while hearing the horrors that befell this intriguing ancient city. As Mt vesuvius is inaccessible from November 20 to March 31, during this time, the hike is replaced with a visit to the iconic City of Naples. Take a panoramic bus tour and have some free time to walk around the city center.

The perfectly preserved port city under layers of Volcanic ash after the eruption in AD 79 takes you back in time. Thousands of years later, you can still explore the eerie streets and step inside homes, and bathhouses, as the licensed guide paints a vivid picture of life in the city's final days.

You will travel from Rome to Pompeii in an air-conditioned private coach, accompanied and entertained all the way by your expert tour coordinator. Skip the line at Pompeii as one of the sites own officially licensed guides will show you around the city. Throughout the ruins, you will come across harrowing death casts: plaster recreations of unfortunate citizens preserved by the superheated volcanic ash.

In addition to the guided portion of your tour, you will have time for wandering and picture-taking in Pompeii followed by an authentic Neapolitan pizza lunch.

Its a short coach ride from Pompeii to the foot of the volcano that still looms above it. A half-mile hike from the parking lot takes you right to the sometimes still-steaming crater of Mt. Vesuvius, still considered to be perhaps the most dangerous volcano in the world.

Stand at the epicenter of that ancient disaster and feel awe at the utter devastation it must have caused, to blast an entire city off the map for millennia. Then turn and enjoy the contrast as the crater offers the most stunning view of the sun-drenched Bay of Naples.

In the winter months, when Vesuvius is closed for hiking, the tour travels from Pompeii to Naples, with panoramic views of the volcano and historical commentary from your tour coordinator along the way. You will have ample free time to explore Naples before the comfortable coach returns you to Rome.

On rare occasions, the crater of Mount Vesuvius may remain closed due to adverse weather conditions or strikes. If this happens, you will be offered an extended tour of Pompeii, a visit to the National Archeological Museum of Pompeii, or a visit to Mount Solfatara, a volcano located in the Phlaegrean Fields near Mount Vesuvius.

Appropriate dress is required for entry into some sites on this tour.

From late November to March the Vesuvius isn't accessible and it is replaced with a visit to the city of Naples with a panoramic bus tour and free time.

The hike up to the crater of Vesuvius requires a good level of general fitness. The walk is uphill at a 14-degree angle and takes roughly 20 minutes.

Please advise any specific dietary requirements at the time of booking.

Travelers should have a strong physical fitness level