Prague In One Day Sightseeing Tour - With Reviews & Ratings

Prague In One Day Sightseeing Tour 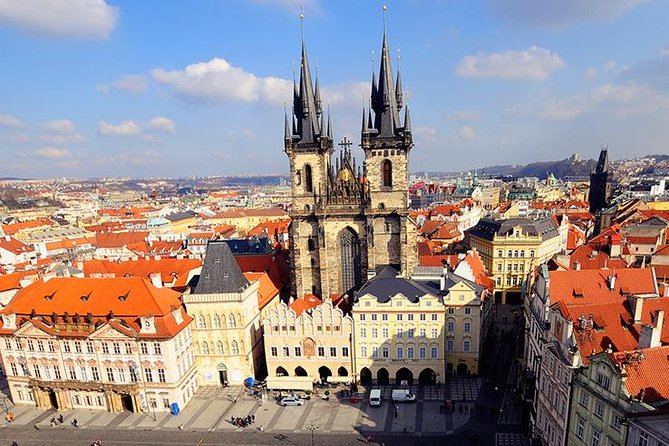 Discover the magic of Prague, a modern and vibrant city full of energy, on this introductory tour of the Czech capital. Perfect for first-time visitors, this 3.5-hour city tour combines luxury coach travel and walking for a well-rounded exploration of Prague's famous sites, such as Prague Castle (a UNESCO World Heritage Site), the State Opera, the National museum, Wenceslas Square and more. Learn about the interesting history of each location you see from your experienced guide.

On this guided Prague sightseeing tour, your driver will take you to the citys famous sites, like the State opera, National museum and Wenceslas square. Admire the statue of St Wenceslas, the patron saint of Bohemia. Then, continue across Charles square along the banks of the River Vltava to Charles bridge, the Rudolfinum, and across the river to Prague castle, a UNESCO World Heritage Site.
You'll have the opportunity to walk around the castle courtyards, where you will see St vitus cathedral, the seat of the Archbishop of Prague. Visit the Royal palace and Golden lane, the legendary place of the mysterious alchemists.
Your coach will then take you across the River Vltava to the Old Town, where youll pass through the former Jewish quarter. In the Old town square, see the St Nicholas Church, the Tyn Cathedral and the historical Old town hall with its world-famous astronomical clock and 12 apostles dating back to 1410. Conclude your tour near the modern city center.

Entrance fees to the Jewish Quarter and Prague Castle

Please note that the tour is approximately 1 hour drive and 2,5 hours walking.