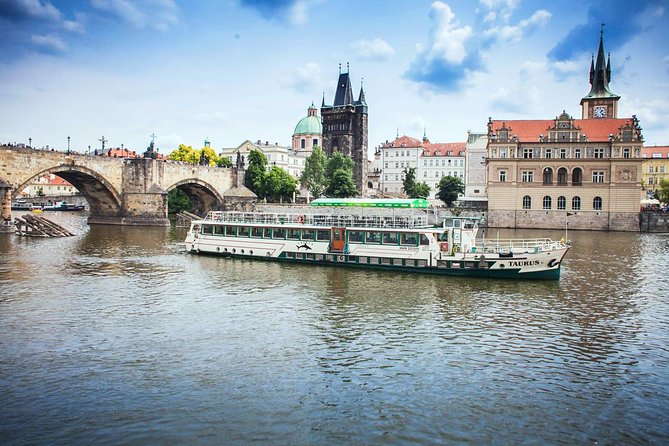 For the perfect introduction to Prague, take a relaxing lunch cruise on the Vltava River taking in some of Prague's most breathtaking sites. Your two-hour cruise features a buffet lunch, accompanied by pleasant music.

After being transferred from your coach to the River Vltava to board an air-conditioned boat for your lunchtime cruise you will have the chance to discover some of Pragues most majestic sites. As you cruise along the Vltava river you will discover many of Prague's important buildings and historic monuments such as the St. Agnes Monastery, the oldest gothic building built between 1231-34. As well as the Rudolfinium, one of the most significant Neo-renaissance structures in Prague along with the National theatre. Today the magnificent Rudolfinium is home to the Czech Philoharmonic orchestra which was founded in 1896. As you pass along the longest river in the Czech Republic which lies beneath an impressive 20 bridges including the baroque inspired Charles bridge, you will see the biggest castle in the world, Prague castle. You will aso experience the wonderful site of Vysehrad, a castle located on a hill over the Vltava river built around the 10th century and much, much more!

During your buffet lunch you will also be surrounded by pleasant music to ensure your cruise is thoroughly enjoyed.