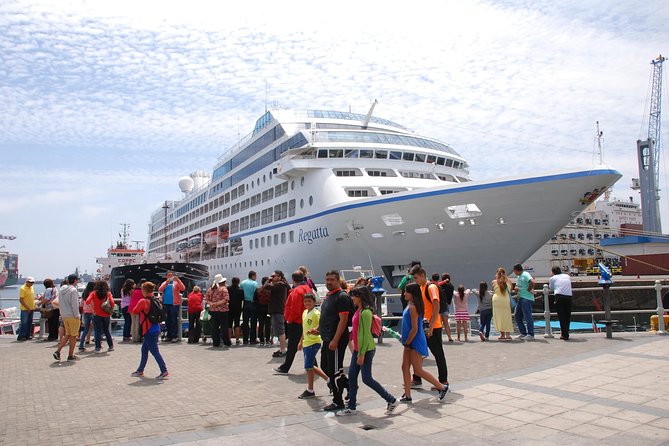 If you are going to use San Antonio port for your cruise this is one of the Best ways of enjoy the city of Santiago-chile">Santiago and the excellence of one of the most important vineyards of Maipo Valley. From your hotel or accomodation enjoy a panoramic city tour inside Santiago visiting the principal turistic spots and learn about the past, present and future of the city. Later we take coast direction for visit undurraga Vineyard which became the first Chilean vineyard to export to the United States. You will find yourself in one of the oldest cellars in the country, built in the year 1885. You will enjoy wine tour with wine tastings, After that depending of your option you will have a a safe drop off on your port of San Antonio around 3:00 pm or the time that you request. This tour also has the option of do the pick up in on this port visiting the vineyard and doing city tour later. Just write us your special requirements and we make the arrangements for you.

The tour starts from your hotel or port of San Antonio or in a meeting point inside the city if you want, all in an air conditioned van with maximum room for 8 people per tour to offer more personalized attention and the best communication between passengers and the guide.

Santiago Chile's capital is a dynamic, modern city where colonial mansions sit among soaring skyscrapers, where folk art becomes fashion and Latin and European cultures intertwine. The city is reinventing itself, with arts, nightlife, and restaurant scenes that have never been better, making this thriving and sophisticated metropolis into the civic, cultural, and historical nucleus of the country. Join this guided tour and discover what makes Santiago the cultural, political and financial center of Chile.

Begin by visiting the installations of the Club Hípico de Santiago (Equestrian Club) which is a replica of one of the most beautiful equestrian clubs of France. After, continue on to the old and wealthy neighborhood of the city, dazzling with its architecture. You may find a few surprises within the current occupants of the buildings. Continue toward the center of the city, which includes the parade ground, the Santa Lucía Hill, Plaza de Armas with the Cathedral, the Government palace La Moneda commercial Central market area.

Wind up to the high part of the city starting with the Fine Arts Museum of Santiago. Visit to Mapocho River that divides the city, and arrive at the barrio of Bellavista, the very popular Bohemian quarter. This place offers-up many attractions, including hip new restaurants and bars, boutiques, avant-garde galleries, colorful antique homes and mansions. Walk in the footsteps of the famous literary, Pablo Neruda.

Later you will be able to taste wines, while exploring the wonderful places that this vineyard has to offer such as the Undurraga family park, the Aliwen corner, in which youll get to know the cosmovision of the Mapuche, one of Chiles most numerous indigenous groups. In the Aliwen corner you will see the vegetation of southern Chile and tall ceremonial wooden carved sculptures unique to the Mapuche culture.

After, according your option you will see the modern vinification plant and visit centennial underground cellars in Santa Ana de Talagante to have a tasting of three reserve wines. Once finished, each visitor gets to keep their wine tasting glass as a gift, and in the wine shop they will have the possibility to purchase the wines and sparkling wines from the Undurraga brand portfolio, as well as fun souvenirs.

Finally we go forward to the city of the port that you selected for do a safe drop off inside the cruise area for continue with your trip. This tour also has the option of do the pick up in one of this port  visiting  thevineyard and doing city tour later. Just write us your special requirements and we make the arrangements for you.

Each traveler is allowed a maximum of 2 suitcase. Oversized or excessive luggage (e.g. surfboards, golf clubs or bikes) may have certain restrictions, please inquire with the operator prior to travel to confirm if your excess luggage is acceptable