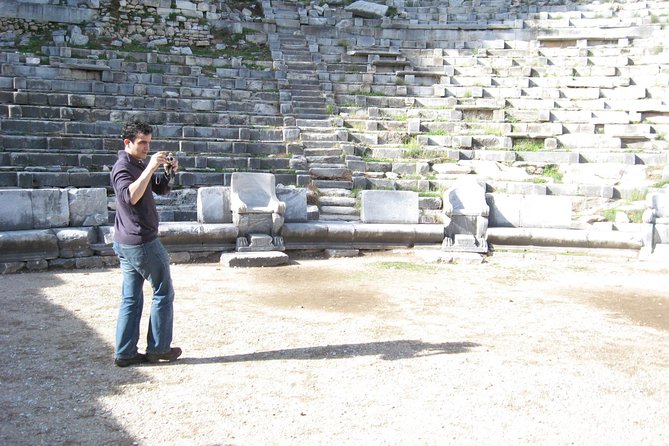 Lunch,Bevareges,Museum Tickets,Insurance and Luxury car(5 seats available) are all included.
Prices of the tours are always for maximum 4 adult visitors.Children up 7 are all free.
We as TRIP TURKEY,a major tour operators association since 1986, Offices are situated in Turkey .
We are Hosting visitors from different countries all over the world such as USA,Spain,England, Germany,Italy,France,China,Australia Russia etc.
We are offering our well-known hospitality and services for visitors and incoming tour operators,
We are a main Sightseeing Tour Operator for guaranteed departure tours in Turkey.
We are operating guaranteed private tours for Kuadas and Anatolia, structured with a well trained staff.
Private Tours are organised with assured expertise with a wide portfolio of licensed guides.
We shall feel more than happy to host you in our country.

Itinerary
This is a typical itinerary for this product
Stop At: Didim, Didim, Turkish Aegean Coast
Didim was originally a pre-Greek religious group that grew up around a sacred wood and holy spring. This natural spring was the place where Leto conceived and gave birth to the twins Artemis and Apollo who were fathered by Zeus. The temple of Apollo was built in Didim and since Apollo spells as didymoi in Greek, the source of Didim's name seems to be very clear.
The earliest temples almost date back to the 7th and 8th century B.C., but its remains lie beneath the later edifices.
Duration: 30 minutes
Stop At: Temple of Apollo, Ataturk Boulevard Yenihisar, Didim 07330 Turkey
Excavation on the Temple Of Apollo in Didyma first started in 1904. It was discovered that before the Ionians ruled the area, the temple was a cult worshiping oracle center, where sacrifices were made. It was connected to the ancient city of Miletus via a long paved road known these days as the sacred route.
Duration: 40 minutes
Stop At: Didim, Didim, Turkish Aegean Coast
Sacred Road A sacred road, paved with stones was built stretching from Didyma to Miletus and it was covered in four days of walking by those who wanted to visit the temple of Apollo or to appeal to the oracle. On both sides of this sacred road, there were marble statues of Brankhids sitting.

Duration: 25 minutes
Stop At: Miletus, Didim Turkey
Founded by the Greeks on the coast of Asia Minor, Miletus will be remembered in the annals of history as the birthplace of mathematician Thales and two famous philosophers, Anaxagoras and Anaximander. Miletus was also one of the oldest and most important Greek cities of Ionia, boasting not one, but four harbors.
Duration: 2 hours
Stop At: Priene Antik Kenti, Soke/aydIn Gllbahe mahallesi, Gullubahce Turkey
Priene originally lay along the Maeander River's mouth, but about 350 bc the citizens built a new city farther inland, on the present site. The new city's main temple, of Athena Polias, was dedicated by Alexander the Great in 334.
Duration: 1 hour