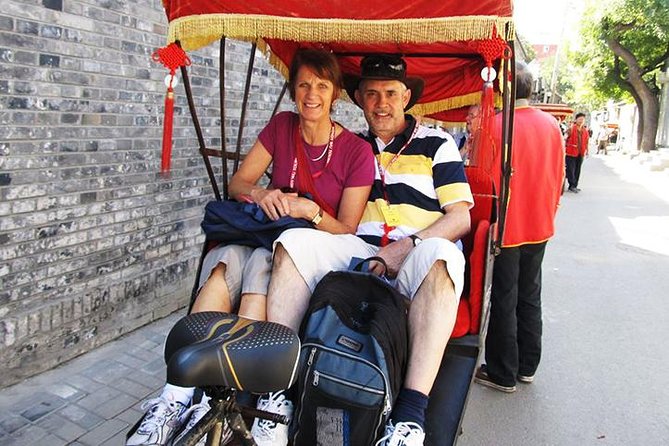 You will find the true old Beijing in these 2 days, have fun with Family and Friends, it will be a memorable trip !

Itinerary
Day 1: Tiananmen Square-Forbidden City-Hutong Rickshaw Tour-Lama Temple-The Legend of Kung Fu Show
Stop At: Tiananmen Square (Tiananmen Guangchang), West Changan Street, Dongcheng District, Beijing 100006 China
Tiananmen Square is located in the center of Beijing, 880 meters from north to south, 500 meters from east to west, and covering an area of 44,0000 square meters.
Duration: 30 minutes
Stop At: Lama Temple (Yonghegong), No.12 Yonghegong Street, Beixinqiao, Dongcheng District, Beijing 100007 China
Yonghe Temple, also known as Harmony and Peace Palace Lamasery, Yonghe Lamasery, or Yonghe Lama Temple, is located at the northeast corner of Beijing City, considered as the largest and most perfectly preserved lamasery in present day China.
Duration: 1 hour
Stop At: Forbidden City-The Palace Museum, No.4 Jingshanqian Street, Dongcheng District, Beijing 100009 China
The Imperial Palace, home to 24 Emperors between 1420 and 1911. Great squares, halls and gates contrast with the intricate networks of side halls, gardens, courtyards and quarters for those who lived in this 'city within a city'. The exhibitions, both permanent and temporary, are also absolutely fascinating.
Duration: 2 hours
Stop At: Hutong Tour, No.9, Zhonglou, Dongcheng District No.9, Zhonglou, Dongcheng District, 100009, Beijing, Beijing 100009 China
In the modern city of Beijing lies a place where you can still see the authentic old Beijing. The place is known as Hutong Area where most local residents still live in traditional courtyard-styled houses. You will take richshaw to visit hutong having an authentic picture of Beijing.
Duration: 1 hour
No meals included on this day.
No accommodation included on this day.
Day 2: Summer Palace-Temple of Heaven
Stop At: Summer Palace (Yiheyuan), No.19 Xinjian Gongmen Road, Haidian District, Beijing 100080 China
The palace is about 12 kilometers northwest of the city center and is equally as famous as the Forbidden City, the Summer Palace is called 'Yiheyuan' (Garden of Nurtured Harmony) in Chinese. It is the best preserved and the largest imperial gardens in China and one of Beijing's premier attractions.
Duration: 20 hours
Stop At: Temple of Heaven, Tiantan Road, Dongcheng District, Beijing 100050 China
The Temple of Heaven, literally the Altar of Heaven is a complex of Taoist buildings situated in the southeastern part of central Beijing, Chongwen District. The complex was visited by the Emperors of the Ming and Qing dynasties for annual ceremonies of prayer to Heaven for good harvest. It is regarded as a Taoist temple, although Chinese Heaven worship, especially by the reigning monarch of the day, pre-dates Taoism.
Duration: 2 hours
No meals included on this day.
No accommodation included on this day.