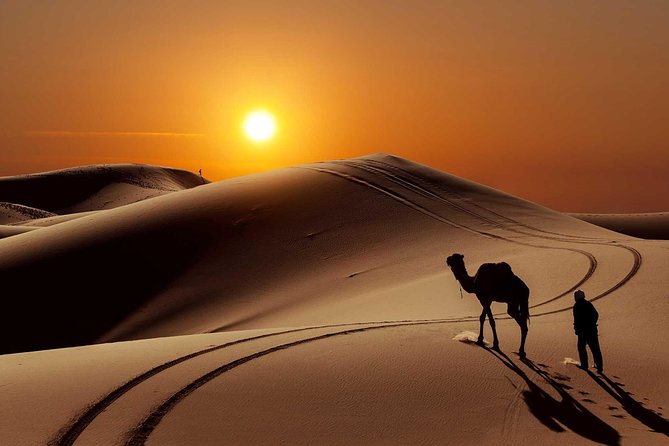 Drive deep into the Sahara Desert and cross the Atlas Mountains on this private 4-day Sahara Desert Morocco tour from Agadir.
Experience life as a nomad in desert, spend a night in a nomadic tent in the Sahara and ride camels across the old caravan routes.
Explore Taroudant, Taliouine, Agdez, Zagora, Ouarzazate, Kasbah Ait Ben Haddou and Marrakesh during this private tour, in a private car with a private driver and a private guide.

Early depart to Ouarzazate cross the Anti- Atlas Mountains passing Argan groves, the road travel to Taroudant, knowen as the little Marrakesh for its ramparts and medina. Visit the silver souk, then route to Taliouine the capital of Saffron. Lunch at your own then route to Taznakht village famous for its Berber carpets, arrival Ksar Ait Ben Haddou, an a Unesco world heritage site where many films were filmed such as: Game of the thrones, Gladiator, The men who would be king, Jesus of Nazareth, The Mummy, Jewel of the Nil,
Continue to Ouarzazate. Dinner & night.

Day 2: Ouarzazate - Zagora - Bivouac
After breakfast, Ouarzazate city tour, then route via the Draa Valley, palms groves, Kasbah and Berbers villages to Zagora where you can use the last ATM in Morocco.  Lunch and drive south  where the road stop, then continue by 4x4 or camel trek at the bivouac, far away from civilization. Spend a night in nomadic Berbers tent camp. Dinner under the stars around camp fire

Day 3: Bivouac Zagora Ouarzazate
After breakfast route to Ouarzazate the desert gate and the Moroccan Hollywood for its 3 films studios, via a lunar landscape with some water sources which only the natives of these places know.Arrival and after lunch, visit the cinema museum, visit one of the 3 films studio, continue the city tour by visiting de Ouarzazate Kasbah, dinner & night in hotel/Riad

Day 4: Ouarzazate Marrakesh Agadir
After breakfast, travel to Marrakesh, cross a High Atlas mountains via Tichka pass (2260 m), discover Berbers village stuck on the sides of mountains, arrival to Marrakesh, optional lunch panoramic visit:  Jemaa el Fna place then continue to Agadir, drop off in your hotel and end of our service.

Adult pricing applies to all travellers