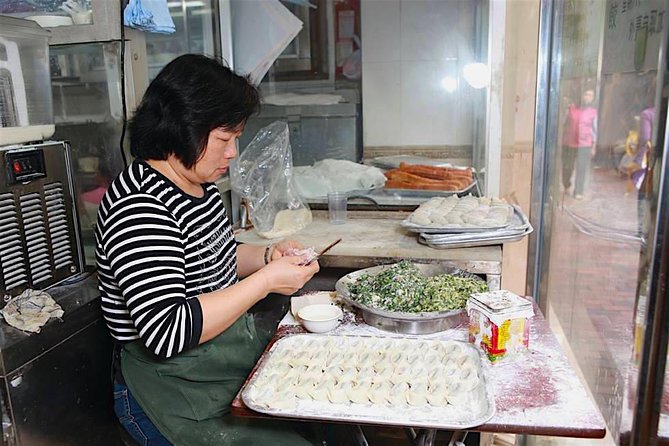 Takea 4-hour private walking night tour of Kowloon, affectionately known as the Dark Side of Hong Kong, and see the city at its grittiest and most captivating.When the sun sets and the humidity starts to ebb, Hong Kong really comes alive. Enjoy snacks and drinks during your stroll. Your guide will take you to visitthe Kowloon Walled City Park, Mong Kok, the Goldfish Market, Ladies Market and Tsim Sha Tsui waterfront where you will watch the Hong Kong light show. Private night tours are just for you and your friends and family. No one else willbe on the tour.

Your private 4-hour night tour can start anytime between 3pm and 5pmat Lok Fu MTR (subway) station. A hotel pick-up can be arranged if required.

The night tour starts with a visit to Kowloon Walled City Park, the former site of the notorious Kowloon Walled City slum. The slum that grew up within the Kowloon Walled City was the most densely populated area ever to exist on the planet. A sprawling shanty town, ostensibly under the control of China, and thus left unpoliced by the British, it was almost entirely outside the law. Life in the Walled City was well documented by documentary film makers, photographers, social scientists and the international press. It was featured in the 1988 cult film Bloodsport, and Jackie Chan fans will know it from his popular film Crime Story. Today, a peaceful park is located where the Walled City slum once stood. Visit the park and discover how the slum came into existence and what really went on inside it.

From Kowloon Walled City Park, the walking tour takes youto into Kowloon City, which is known as Hong Kongs Little Thailand. Here youwill try a traditional Thai street food, as well as a local Cantonese delicacy from one of Hong Kongs most famous and beloved bakeries.

Our night tour adventure continues in Mong Kok, a district famous for its shopping, markets and glimmering neon lights. It is also a centre of Triad (criminal gang) activity in Hong Kong. It is here that we will learn more about organized crime in Hong Kong whilst we relax with a cold beer. We will then explore the bustling streets of Mong Kok, taking in the famous Goldfish Market , electronics streets and Ladies Market. We will explain what is going on inside the masses of high rise buildings surrounding the markets. Prostitution, illegal gambling and subdivided living is all rife inthe Mong Kok district.

From the gritty and frantic streets of Mong Kok, we make our way to the more glamorous district of Tsim Sha Tsui on the peninsular of Kowloon. Here we visit Chungking Mansions, a dilapidated 17 story building built in the 1960s full of cheap guesthouses and cut-rate businesses. We will talk about the building and its fascinating story.From the cheapest place to sleep in Hong Kong we cross the road and visit one of the most expensive places to sleep; The Peninsula hotel. This beautiful art deco building holds its own dark story which will discuss. Continuing we come to Hullett House, another historic building, constructed in 1884 and previously occupied by the Marine Police.Our tour ends at the Tsim Sha Tsui waterfront where we discuss the history and development of the Hong Kong skyline from the early 1800s to present day. Four hour tours starting at 4pm will finish just in time for the 8pm light show!

Snacks and drinks (2 per person)

Not suited for people with mobility restrictions

Not suitable for children

If you wish to book a hotel pick-up this add-on can be invoiced after booking. Please contact the tour operator at bookings@hellohongkong.com.hk hotel pick-ups require an additional hour to be added to your tour and cost HK$300 per group.