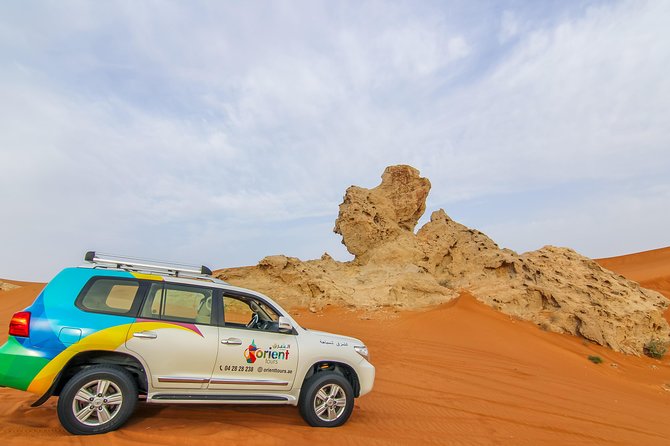 Visit Hatta Heritage Village and the beguiling desert rock formations of Jebel Maleihah (fossil rock) and Camel Rock with a private guide! With transport by 4x4 jeep, the day trip from Dubai takes in some of the United Arab Emirates finest scenery, from desert dunes to craggy mountain passes of Al-Hajar. Learn about life in 16th-century Hatta on a tour of its heritage village, stop for apicnic breakfastin the desert, and pose for photos by impressive rock formations. Watch a Falconer demonstrate the hunting skills of the Emiratis favorite bird and share in his knowledge about why the magnificentFalconsare so special to the Nation.
The itinerary on this private tour is flexible and can be tailored to your interests.

Start your day with a pickup by 4x4 jeep from your Dubai hotel, and then travel east through the UAES sultry desert landscape. As you travel, chat with your private guide about the UAE and the sights that you want to see. The itinerary, as described below, is flexible and can be tailored to your preferences.

Traveling in the direction of the Omani border, your first destination of the day is Hatta, a sheikdom and ancient trading enclave high up in the Al-Hajar mountains. Relax as you watch the terrain change from the pristine streets of Dubai to the soft-red dunes of the desert and rocky mountain passes of Al-Hajar.

After roughly two hours, arrive in Hajar and stop to explore its 16th-century highlight: Hajar Heritage Village. With your guide, walk around the villages mosques, watchtowers and houses while hearing how such buildings were made from materials such as mud, reed and stone. See Hatta Fort, and learn about daily village life for the Hatta people many centuries ago.

Having enjoyed 1.5 hours walking around the village, stroll back to your 4X4 jeep to travel deeper into the desert. Stop for apicnic breakfastand then continue traveling to Jebel Maleihah, a site known locally as fossil rock. Look for marine fossils imprints of ocean life millions of years ago when water covered Arabia on a stroll around the rocky desert outcrop, and then continue to nearby Camel Rock in Fujairah. The otherworldly rock formation makes for a dramatic photo set against the backdrop of undulating dunes and sandstone buttes. Also watch a Falconer demonstrate the hunting skills of the Emiratis favorite bird and share in his knowledge about why the magnificentFalconsare so special to the Nation.

Continue your journey back to Dubai, taking in more sweeping expanses of desert, and then finish your day trip with a drop-off at your hotel in the early evening.

The duration of tour is approximate, the exact duration will depend on the time of day and traffic conditions

Guests visiting the UAE during the Summer months (June September) are advised that peak daytime temperatures sometimes reach 42 45 degrees Celsius. Humidity levels can also exceed 90 percent during this period. We recommend all our guests to take adequate precaution, especially during off-road tours"