Private All Inclusive Kandy Tour From Bentota And Beruwela

Private All Inclusive Kandy Tour From Bentota And Beruwela 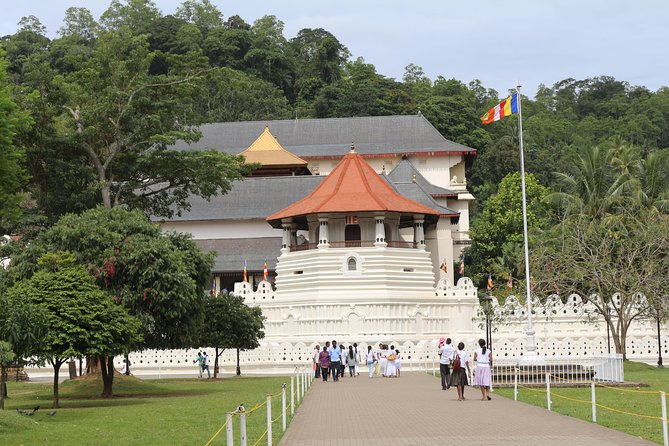 Explore the Sacred City of Kandy, a designated UNESCO World Heritage Site, on this private, full-day tour. Head to the Spice Garden at Mawanella with your private guide to sample scents of one of Sri Lanka's most celebrated exports. Afterward, visit the city of Kandy, with stops at the Temple of Tooth Relic (Sri Dalada Maligawa), Tea Factory in Giragama, Market Square, Upper Lake Drive, the Gem Lapidary, and more.

5:00am: You will be picked up around 6.00am from your hotel in Bentota, Beruwela, Ahungalla, Kalutara, Waskaduwa and then proceed to Kandy, en route visit Spice Garden in Mawanella and a Tea Factory in Giragama.

For centuries, spices have been one of Sri Lankas most celebrated exports and are used for medicines and cosmetics as well as to flavor foods. You will sample scents and flavors such as cinnamon, ginger, pepper, vanilla and cardamom. Batik is the ancient art of mixing colors using wax as the main component and Sri Lanka is one of the worlds leading exponents. Examples range from simple, single-colored designs to multi-colored masterpieces.

On arrival at Giragama, you will visit a tea plantation 1,673 feet (510 meters) above sea level. Tea was first planted in Sri Lanka in 1824 at the Botanical Gardens at Peradeniya, when a few plants were brought from China. Your will spend an hour exploring the the plantation and factory before leaving for Kandy which is approximately 30 minutes away.

Kandy, the hill capital, is another World Heritage Site. It was the last stronghold of the Sinhalese Kings during the Portuguese, Dutch and British rule and finally ceded to the British in 1815 after an agreement. To the Buddhists of Sri Lanka and the World, Kandy is one of the most sacred sites as it is the home of the Dalada Maligawa - Temple of the Sacred Tooth Relic of Lord Buddha. Close by are the remains of the Royal Palace (Maha Wasala), Palle Wasala- where the Queens stayed-now used for the National Museum, Meda Wasala where other close relatives lived, Audience Hall, Natha Devala and Vishnu Devala are situated close by. The Bathing Pavilion (Ulpenge) is by the Lake and in the Center of the lake is the Island called Kiri Samudraya (Milk white ocean) used by the kings as the summerhouse. Today it is the center of Buddhism, Arts, Crafts, Dancing, Music and Culture.

Do the city tour of Kandy including a visit to the temple of the sacred Tooth Relic, upper lake drive and market square, Gem Lapidary and Wood Carving center.

During the city tour you will enjoy your lunch at Oakray Restaurant.

After this visit, you will proceed to your hotel where you will be dropped off.

Hotel pickup and drop-off by an air conditioned vehicle in Colombo, Mount Lavinia or Negombo

If you intend to visit Kandy Temple, please wear clothes to cover your knees and shoulders.