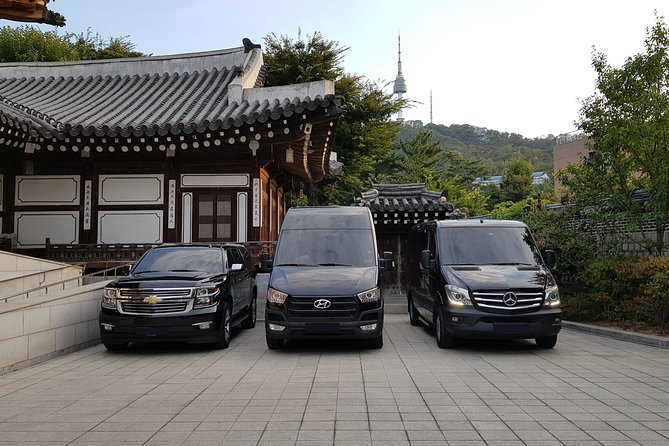 Enjoy an easy, stylish arrival in Seoul with your pre-booked private transfer service. Relax on a 60 to 90-minute transfer to your Seoul hotel or accommodation, available 24-hours a day, 7-days a week. Transportation is provided in a luxury sedan, 6-seat van, or a 12-seat bus, depending on your group size. You willreceive complimentary bottled water during your transfer along with a meet and greet service upon arrival at the airport.Group maximum is 12 travelers.

Skip the stress of finding a taxi or sharing a shuttle and enjoy the comfort and convenience of your private transfer. You will be picked up by a professional, English-speaking driver when your plane arrives and transferred directly to your Seoul hotel or accommodation.

Travel in a spacious vehicle based on your group's size and take time to enjoy the sights of the city as your driver handles the traffic. This transfer service is available 24-hours a day, 7-days a week to ensure convenience when you need it.

After leaving the baggage claim, you will find your professional chauffeur holding a board with your name on it awaiting your arrival. Depending on traffic conditions, your transferwill be 60 to 90-minutes and will conclude with drop off directly at the front of your hotel or accommodation.

Price is based on vehicle size necessary for your party