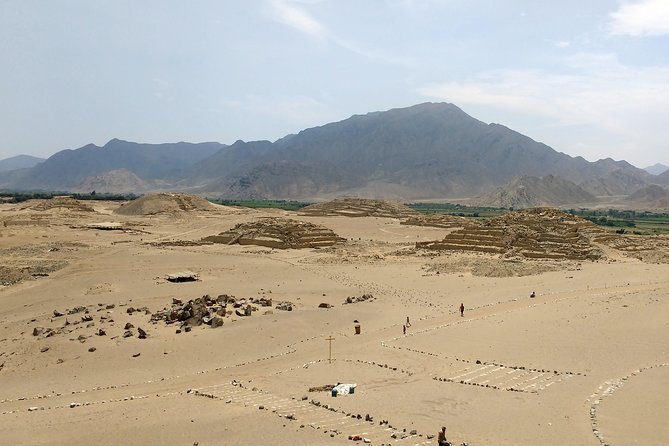 Enjoy this full day tour to Caral, considered the mother of cultures and the oldest civilization of the Americas. This private archaeological tour of the lost pyramids in Peru is one of the most interesting and memorable travel experiences.

Your adventure to the lost pyramids of Caral begins early in the morning; your guide will pick you up at your hotel or cruise ship port and drive to the Valley of Supe where the complex is located, about a 3 hour drive. The route goes along the Peruvian coast seeing small villages, agricultural areas and cloudy zones. You will have the chance to stop and take some pictures, interact with locals or purchase something for the route.

Upon arrival to the Supe Valley, your guide will give you an overview of the complex, covering the history and main discoveries made by archaeologists. The first thing you will see when arriving to Caral are 6 pyramids around a central square, next to them an amphitheater and a temple, the religious center of Caral. Your walking tour takes for about 2 hours.

The visit to Caral is a visit to a very powerful society, well organized and incredibly ancient. It was a pre-ceramic society without weapons indicators, without walls protection, without evidence of conflict. They were a society that knew how to have fun, with musical instruments made from condors bones.

After your private tour in Caral, it is time to return to the city of Lima. During the return trip, your guide will stop in one of the most recommended restaurants located across the Pacific Ocean and enjoy a typical dish.
Your tour finishes upon arrival to your city hotel, Lima city Airport or the port of Callao. The client will be dropped off at any of these 2 points previous arrangement.