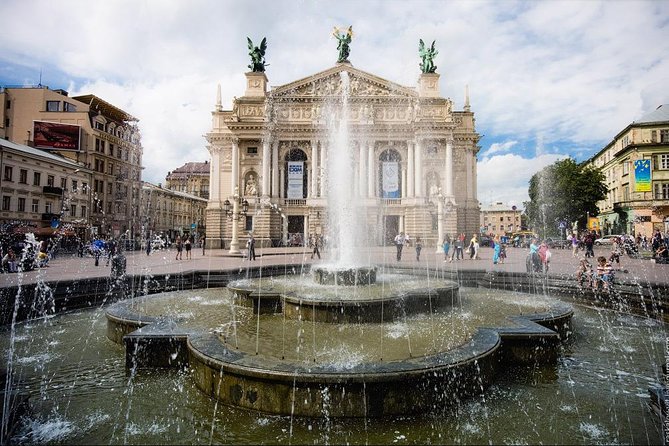 Lviv was founded in the middle of the 13th century. Lviv is one of the oldest town of the Eastern Europe with first name Lenberg. A high standard of cultural life attracted there talented artists from other countries painters, sculptors, architects.

The tour will show you the most remarkable sights of the ancient city, which has preserved as an indivisible architectural ensemble in spite of wars, fires and revolutions - the medieval Rynok Square with the Town Hall and a set of ancient buildings, the Gothic Latin Cathedral, beautiful Cathedrals of Bernadines, Jesuits and Dominicans, ruin of the all Europe famous Golden Rosa Synagogue, magnificent city fortifications, including the Town and Royal Armouries, Gunpowder Tower and other old relics.

High castle Hill - the cradle of Lviv, the place of the first fortress built in 1256 - view of the city; National University, the oldest in Ukraine, founded in 1661, - perfect example of Neo Renaissance architecture; Polytechnic Academy, the oldest technical school in Ukraine, founded in 1844, - The swan song of Lviv classic style; St. George Cathedral, the main Greek-Catholic church, the residence of the Pope during his visit to Ukraine, - the masterpiece of baroque architecture (18th c.); Lviv Military Institute, the oldest military establishment in Galychyna, based on Lviv school of Cadets, founded 100 years ago; the Soviet Army monument; Stryjsky park - example of English park (19th c.), Freedom Avenue - the main prospect in Lviv, the ensemble of eclectic architecture; Lviv Opera House (19th c.).

Entrance fees to Museums (about 2 US$ per person)

Souvenirs and photos are available

You can enjoy this tour while walking. During the walking tour, you will enjoy it by also using the public transport between sightseeing sites. The tour will provided in downtown and some things are not available due to the destinations between them.

Another language speaking guide is under the request.