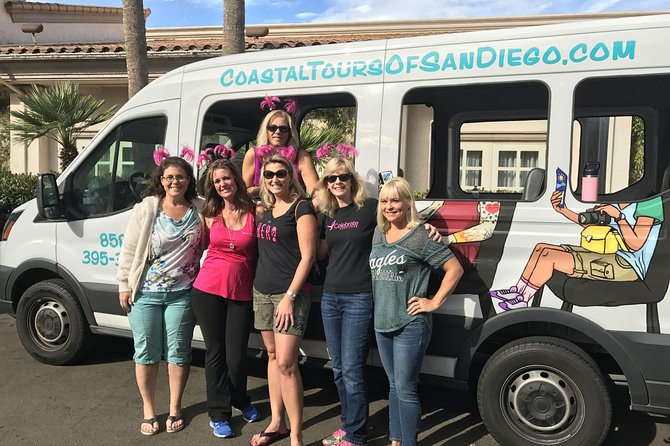 Ride in comfort in our windowless 7-passenger van with captain chairs, USB ports, speakers and cup holders by every seat. Breathe in the fresh ocean air while you discover the real beach culture of northern San diego. Enjoy the personal service of a local guide who will custom design the tour to meet all your requirements. Visit the best places that are frequented by locals. Sit back and enjoy all the incredible scenery instead of dealing with navigation, traffic and parking problems. Spend as much or as little time as you like at each venue. Go shopping, stop for a drink, take a dip in the ocean, go to a specific restaurant for lunch, our goal is to make sure you have a great time. From Cabrillo national monument in Point loma to Encinitas in North county no one will show you the coast of San diego like Coastal Tours of San diego!

Pass by the golf course. Sometimes we stop at the Lodge.

Walk along Mission bay. Walk through the Catamaran Hotel.

Incredible view of the Harbor and Downtown San Diego. Pass through the 2nd largest military cemetery in the US. Statue and museum of Juan Cabrillo. Light house and Light House museum. Visit the Tidepools.

View the Sea Cave. Walk down the cliffs to the beach, where the seals and sea lions are. Walk along the rocks next to the sea lions and seals.

Walk along the beach where all the kayaks launch to go over to the sea caves. See the stunning Mansion hanging over the cliff. Pass all the cute stores and restaurants.

Pass by the 2nd longest pier on the west coast. Drive down quirky Newport Avenue past Hodads and the Hostel.

Watch the Hang Gliders and Para Gliders soar off the cliffs of Torrey Pines. See the Raptors and Falcon in the large bird cage. Walk over to the cliffs overlooking the magnificient Black\'s beach.

Walk along the Boardwalk. Check out the shops, restaurants, bars, and beach life. Walk to the end of Crystal Pier and watch all the surfers.

Drive on top of Sunset Cliffs. Enjoy the magnificent scenery.

Drive along the cliffs of Pacific Coast Highway. Pass the small beach town of Cardiff and the Kook Statue.