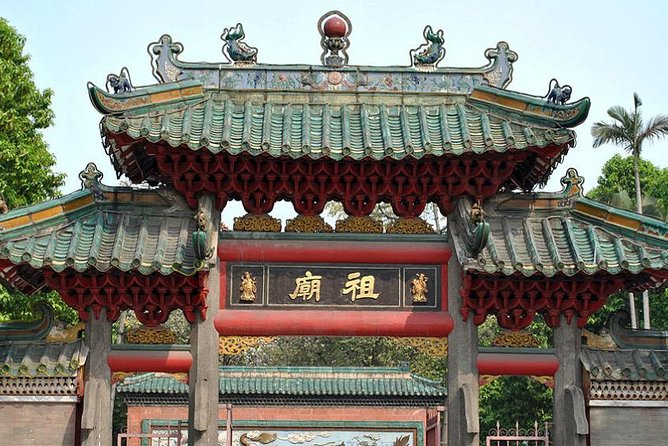 Visit the city of Foshan, historically known throughout China for its incredible ceramic production, on a full-day trip from Guangzhou. Travel by private vehicle with an expert guide to three top sites: Foshan Ancestral Temple, Nanfeng Ancient Furnace and Shiwan Art Ceramics Market. See local artisans at work in Shiwan village and learn about the beautiful handcrafted tiles that have made the area famous since before the Qing Dynasty! This private tour includes a Chinese-style lunch and round-trip transport.

After hotel pickup, your driver and English-speaking guide will take you by private, air-conditioned vehicle to Foshan City. Located just 50 minutes from Guangzhou in Guangdong province, Foshan is a city famous for its long cultural history.

Founded during the Jin Dynasty, Foshan was a well-populated village inhabited by fishermen and farmers as early as the Qin and Han dynasties. By the Tang (618-907 AD) and Song (960-1279 AD) dynasties, Foshan was already an important trade port in Southern China renowned for its handicrafts, commerce and culture.

As you tour the Ancestral Temple, admire the locally produced decorations, furnishings and ceramics for which Foshan is known. Your guide will enlighten you about the temples use, before the Qing Dynasty, as a meeting place to conduct official business.

Your guide will take you to a local restaurant to enjoy a lunch of traditional Chinese specialties. Then, head to Shiwan village to visit the Nanfeng Ancient Furnace, a kiln built in the early 16th century and still used for firing ceramics today. Named for the cool summer winds that blew at the back of the furnace through the banyan trees growing there, Nanfeng is a fine example of a dragon kiln, as its roof resembles the scales of a dragons back. Learn from your guide about the flame, which has burned continuously for 500 years ever since the Tang Dynasty! Watch a demonstration by a skilled artisan and try your hand at the pottery wheel.

With a 5,000-year-long history of ceramic making that reached its peak in the Ming and Qing dynasties, Shiwans ceramic tiles are considered some of the best in the world. Wander through the Shiwan Art Ceramics Market with your guide and see animal sculptures and human figurines for which the kiln became famous during the Qing Dynasty of the 1600s. Browse the stalls to see different replicas of modern and ancient designs.

Your day trip concludes with private transport back to your hotel in Guangzhou.

Adult pricing applies to all travelers; infants are free of charge