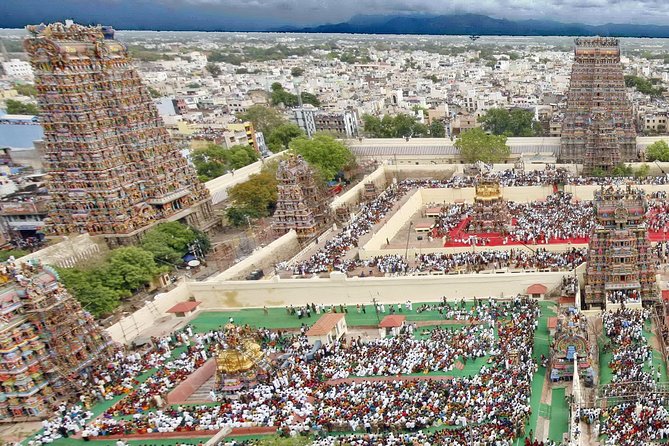 It is said that the city Madurai, which is located on the banks of the river Vaigai, has been a major settlement for about two millennia. It is one of the oldest continuously inhabited cities in the world. It is also one of India's most outstanding Hindu pilgrimage centers. Join us for the private full-day sightseeing tour and explore the city, popular for its temples built by Pandyan and Madurai Nayak kings in the Dravidian style of architecture.

Itinerary
This is a typical itinerary for this product
Stop At: Madurai Meenakshi Amman Temple, Venmani Rd, Sellur, Madurai 625002 India
Superb example of Dravidian architecture and sculpture, the temple has two sanctorum, one dedicated to Shiva as Sundareswarar and the other to his consort Meenakshi. This is one of the largest temple complexes in the country. Of the many pieces of sculpture in the temple, the most striking is that of the divine marriage of goddess Meenakshi with Sundareswarar. The highlight of the temple is the Hall of Thousand Pillars. The hall has 985 pillars with a number of ornate and bold sculptures. Viewed from any angle, these pillars appear to be in a straight line, an architectural marvel indeed. In the outer most corridor is situated the matchless musical pillars carved out of stones; when tapped, they produce different musical notes. The museum of icons, photographs and illustrations in this hall is of great interest. The temple is usually open from 0500 hrs to 1230 hrs and 1600 hrs to 2130 hrs.
Duration: 30 minutes
Stop At: Thirumalai Nayakar Mahal, Near Meenakshi Temple, Madurai India
This monumental palace was built in 1636 AD by the ruler by King Tirumalai Nayak, one of the leading kings of the Nayak dynasty which ruled Madurai. The building, which we see today, is the main palace where the king lived. The original palace complex was four times larger. The palace complex consisted of mainly two parts. The imposing edifice is famous for the 'stucco work' on its domes and impressive arches. The 'Sorgavilasam' (celestial pavilion) constructed entirely of brick and mortar without the support of a single rafter or girder, is a marvel of Indo-Saracenic architectural style. There is a museum in the palace building, which has sections dealing with the history of Madurai and the art and architecture of Tamil Nadu.

Duration: 30 minutes
Stop At: Vandiyur Mariamman Teppakulam, Teppakulam, Madurai India
It is also called as Vandiyur Mariamman Teppakulam just 2 kms from Meenakshi Temple in the Town. There are Ghats on all four sides with 12 steps . It is said that, this pit was dug to fetch sand to build Thirumalai Nayakar Palace. The pit was later converted with brick work as a Holy tank and Thirumalai Nayakar Built the Vandiyur Mariamman Temple too on the northern side of the tank. In the middle of the tank there is a Mandapam called Maiya Mandapam [center Mandapam] with a small Ganesh Temple and a Garden. The Float Festival at Mariamman Teppkulam is one of the most colourful temple festival, annually held in the month of Thai [Jan-Feb] to mark the birth anniversary of King Thirumalai Nayak.Goddess Meenakshi and Lord Sundareswarar are seated on an illuminated Float [Theppam] colorfully decorated with flowers and the Theppam moves around the tank with the traditional musical treat in the background, watched by thousands of devotees.
Duration: 30 minutes