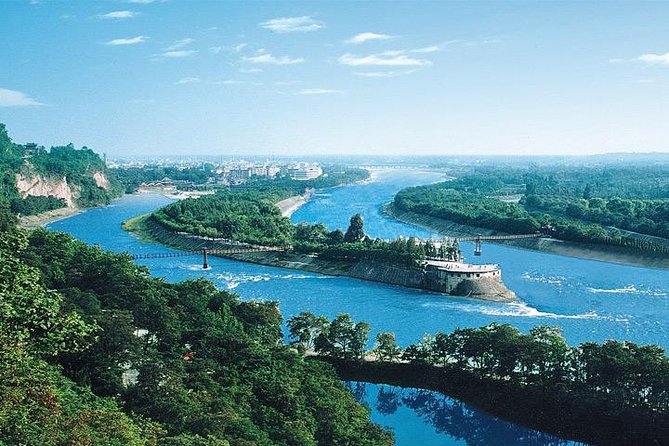 Discover the UNESCO World Heritage Site of Dujiangyan and highlights of old Chengdu on this 8-hour private day trip with personal guide and driver. Explore the Dujiangyuan Irrigation System, first built in the third century BC and still in use today, and the stunning landscapes around it. Then return to Chengdu to explore the historic Wuhou Temple and Jinli Street.

Your private guide and personal driver will collect you from your central Chengdu hotel by 8:30am. You'll drive for an hour or so, traffic depending, to see the ancient Dujiangyan irrigation system. First built in 256 BC under the state of Qin, which became leader of the first unified Chinese empire, it still controls the waters of the Minjiang River today a feat of engineering that has earned it a UNESCO listing. Take the time to appreciate the natural landscape around it, replete with forested hills, ancient temples, brilliant pagodas, and rushing rivers.

Afterwards, hop back in your private climate-controlled vehicle and head back into the city. Whenever you're ready, your guide will be happy to recommend a Sichuan restaurant to stop for lunch (own expense).

Your first stop in Chengdu is the Wuhou Temple, built to commemorate the ancient military strategist Zhuge Liang, who flourished during the Three Kingdoms period in the third century AD. Surrounded by mature cypresses and classical scarlet walls, the temple has a nostalgic feel that belies its impressive 400,000-square-foot (37,000-square-meter) scale.

From here, it's a very short stroll to Jinli Street, an atmospheric ancient street full of vendors selling traditional Sichuan snacks and crafts. The elegant architecture is a trip back in time to China's last imperial dynasty, the Qing. You'll return to your hotel about 4:30pm.

Optional activities and excursions not specified in the itinerary