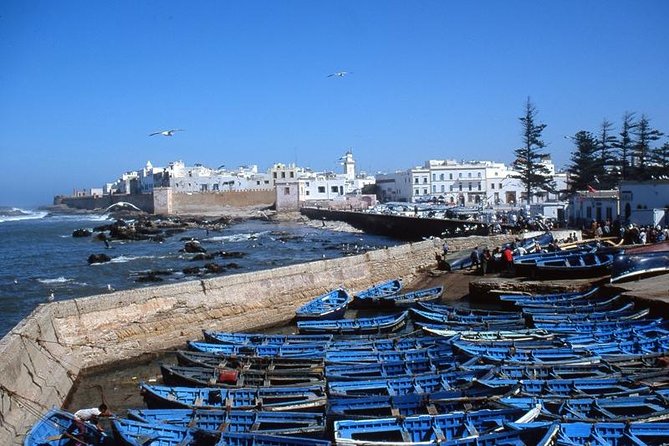 Full-day trip to the tranquil seaside town of Essaouira.Perched on the Atlantic coast, Essaouira is a fortified seaside town full of character with a bustling fishing port, a UNESCO World Heritage Site medina, lively art/caf scene and a tranquil atmosphere. Earning its name in the 1960s as the likes of Jimi Hendrix and Bob Marley found the windswept beaches of Essaouira it has since become a place well known for being uniquely chilled out, with architectural, cultural and sporting significance.

Meet a driver at your Marrakech hotel for 8am departure, then enjoy views of the Moroccan countryside during the 2.5-hour drive to Essaouirafor an extra comfortable ride, the Wi-Fi equipped car is stocked with mineral water and a charger for your phone or tablet.

Upon arrival inEssaouira, you'll have an independent day to see the townat your own pace, from the UNESCO-listed medina to beaches, markets, and cafes.

Consistent windsmake this a popular spot for kite and windsurfers, and you can sample the catch of the dayin seafood restaurants at the edge of the water.If you feel like a walk,stroll city walls with views of the Atlantic, then visit craft shops and women cooperatives thatstock locally-made Argan oil.

Meet back up with the driver for 4pm departure to Marrakech, where this tour concludes with drop-off at your original departure point.