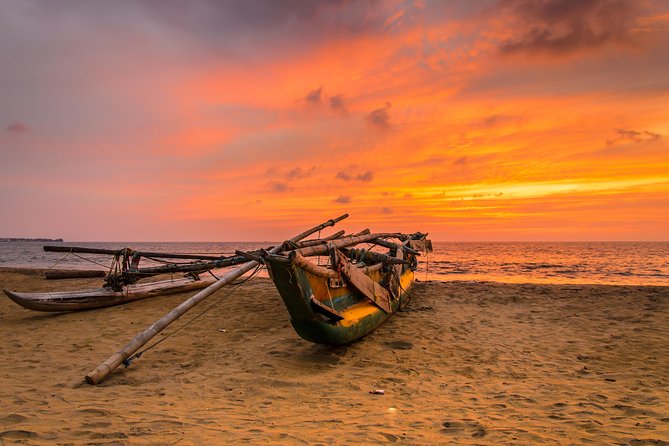 The Negombo City Tour takes you on a journey into the North of Sri Lankas Capital and Urban Metropolis, Colombo, to witness its most spectacular sights. View elegant colonial buildings rising in tandem with shiny new business constructions in this unique city that boasts of a blend of times both modern and past. Visit the 18th Century St. Marys church that creates a tranquil haven amidst the hustle and bustle. Learn of Negombo's history and surrounding legends through its most interesting landmarks as you explore to your hearts content.
SKU: LK60016000

You will start your tour upon being picked up by your chauffeur at 0830 hrs from your hotel in Colombo. Journey into the North of the Capital, Colombo, Negombo City Tour, and witness spectacular sights with memorable experiences and captivating stories as you learn about the history behind one of Asias richest cultures. Embark on an adventure like never before and become a part of the city with this private tour of Negombo.

The route that you will be taking is as follows,

Negombo City: Negombo is a city on the west coast of Sri Lanka, north of the capital, Colombo. Near the waterfront, the remains of the 17th Century Dutch Fort now houses a prison. Negombo Lagoon, lined with fishermens huts, feeds into the Dutch-era Hamilton Canal. The canal leads south to Colombo. Neo-classical St. Marys Church, completed in the early 19th Century, features a ceiling decorated with vivid religious paintings.

Fish Market: Negombo is a traditional fishing town of Sri Lanka. The fishermen of the Negombo lagoon live in abject poverty in small, thatched palm houses in villages on the waters edge. They rely on traditional knowledge of the seasons for their livelihood.

Dutch Fort: One of the most distinct tourist attractions in Negombo is undeniably the Old Dutch Fort. This is a structure with a history dating back to Sri Lankas colonial days when the nation was once under the rule of initially the Portuguese, and then the Dutch. The city was encircled by an earth wall. Eventually, the landmass on which the Old Dutch Fort Gate was constructed, was regularly washed by the sea.

St. Marys Church in Negombo: The coastal town of Negombo is an area in Sri Lanka that is dominated heavily by Christian Faith and one of the towns most important structures is St. Marys Church. This sacred building is lavish and grand in nature, standing tall amidst other structures in the town. The church consists of three main levels which are immediately apparent when approaching the structure from the front.

Dutch Hamilton Canal: Between 1802 and 1804, when the Island was under British governance, a new Colombo-Negombo canal was built, conceived by Garvin Hamilton, British Agent of Revenue and Commerce. The Hamilton Canal ran west of the old Dutch Canal, quite close to the sea from the mouth of the Kelani River at Hekitta, all the way to the southern edge of the Negombo Lagoon at Pamunugama; an astounding distance of 14.5 kilometres.

Upon reaching the end of the tour, you will be dropped off back at your hotel at approximately 1430 hrs.

Transport throughout the tour with an air-conditioned vehicle.

Service of an English-Speaking Chauffeur Guide.

Comfortable walking shoes recommended for this tour. Drive time may change due to unpredictable road traffic. Photography stops on the way can be arranged but within locations with reasonable parking areas.