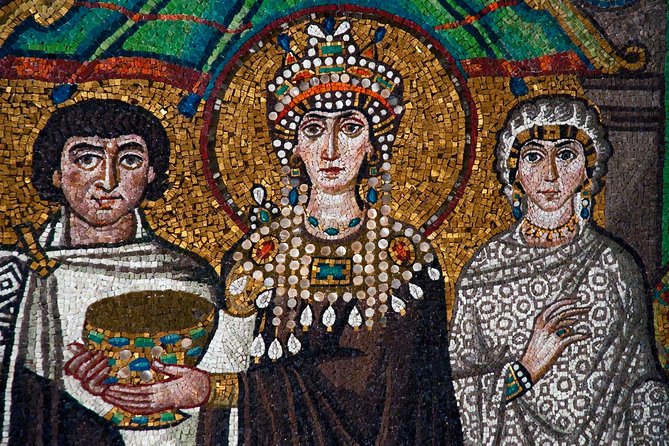 Enjoy a full-day private tour of Ravenna and nearby Ferrara to explore the major attractions in each city. See Ravenna'sBasilica of San Vitale, the Mausoleum of Galla Placidia, the Piazza del Popolo, St Francis' Crypt, the tomb of Dante Alighieri, and the Basilica of Sant'Apollinare Nuovo. Then see Ferrara'simposing Castello Estense, the majestic Romanesque cathedral, and the streets of the Medieval and Renaissance historical city center.

Meet your private guide in either Ravenna or Ferrara to begin this full-day tour.

Visit the historic city of Ravenna in the morning.1600 years ago Ravenna was the capital of the Western Roman Empire, and later thecapital of the Kingdom of Italy, a key town in the history of the Western world and beyond. Ravenna retains the lavish testimonials of this glorious past; in fact, the city preserves the richest world heritage of mosaics dating from the 5th and the 6th century AD, kept within its Paleo-Christian and Byzantine religious buildings, all UNESCO World Heritage sites.

Visiting the historic center on foot or by bicycle is like reliving thousands of years of history. Start from ancient Roman times with Ravenna's early Christian basilicas, through the Renaissance and up to the 19th century, when the city was rediscovered by famous visitors such as Oscar Wilde, Sigmund Freud, Lord Byron, and Gustav Klimt.

In the afternoon, head for the city of Ferrara,a splendid city of art. Enjoy walking its streets to absorb its character. The magnificence of this Renaissance capital is revealed on every corner.

Through its glorious past you can understand the roots of its present. The Este family governed here for three centuries and gave the city the appearance it has today: a uniquely planned city, harmoniously fusing Medieval and Renaissance, Europe's first modern city. It is precisely these characteristics that secured its UNESCO World Heritage status.

This private day tour will allow you to visit these 2 beautiful cities, and isa great introductory tour.