Private DAY TOUR TO GIZA PYRAMIDS,SPHINX WITH ENTRY Inside The Great Pyramid - Cairo

Private DAY TOUR TO GIZA PYRAMIDS,SPHINX WITH ENTRY Inside The Great Pyramid - Cairo 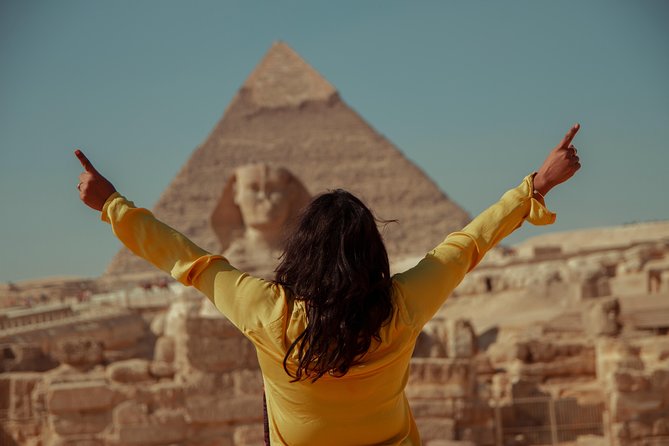 Enjoy Half day tour to Giza Pyramids Where you visit the Great Pyramid of Giza and the Sphinx.that belongs to kingsCheops, Chephren & Mykerinos including the entry of the great Pyramid of Cheops and visit to Valley Temple where the great Sphinx locates and it is the best place where you can take amazing Photos with Pyramids and Sphinx.Giza Pyramids Tour runs daily Startsat 8:00 am
Camel ride around Giza Pyramids can be added with 10 $ extra charge per person

Itinerary
This is a typical itinerary for this product
Stop At: Pyramids of Giza, Al Haram Str., Giza 12611 Egypt
The Giza pyramid complex, also called the Giza Necropolis, is the site on the Giza Plateau in Greater Cairo, Egypt that includes the Great Pyramid of Giza, the Pyramid of Khafre, and the Pyramid of Menkaure, along with their associated pyramid complexes and the Great Sphinx of Giza. All were built during the Fourth Dynasty of the Old Kingdom of Ancient Egypt. The site also includes several cemeteries and the remains of a workers' village.
The site is at the edges of the Western Desert, approximately 9 km (5 mi) west of the Nile River in the city of Giza, and about 13 km (8 mi) southwest of the city centre of Cairo.
The Great Pyramid and the Pyramid of Khafre are the largest pyramids built in ancient Egypt, and they have historically been common as emblems of ancient Egypt in the Western imagination.[1][2] They were popularised in Hellenistic times, when the Great Pyramid was listed by Antipater of Sidon as one of the Seven Wonders of the World. It is by far the oldest of the ancient Wonders and the only one still in existence.
Duration: 3 hours
Stop At: Great Pyramid of Cheops (Khufu), Giza Egypt
The Great Pyramid of Giza (also known as the Pyramid of Khufu or the Pyramid of Cheops) is the oldest and largest of the three pyramids in the Giza pyramid complex bordering present-day Giza in Greater Cairo, Egypt. It is the oldest of the Seven Wonders of the Ancient World, and the only one to remain largely intact.
Based on a mark in an interior chamber naming the work gang and a reference to the Fourth Dynasty Egyptian pharaoh Khufu, some Egyptologists believe that the pyramid was thus built as a tomb over a 10- to 20-year period concluding around 2560 BC. Initially standing at 146.5 metres (481 feet), the Great Pyramid was the tallest man-made structure in the world for more than 3,800 years until Lincoln Cathedral was finished in 1311 AD. Originally, the Great Pyramid was covered by limestone casing stones that formed a smooth outer surface; what is seen today is the underlying core structure. Some of the casing stones that once covered the structure can still be seen around the base. There have been varying scientific and alternative theories about the Great Pyramid's construction techniques. Most accepted construction hypotheses are based on the idea that it was built by moving huge stones from a quarry and dragging and lifting them into place.
There are three known chambers inside the Great Pyramid. The lowest chamber is cut into the bedrock upon which the pyramid was built and was unfinished. The so-called[2] Queen's Chamber and King's Chamber are higher up within the pyramid structure. The main part of the Giza complex is a set of buildings that included two mortuary temples in honour of Khufu (one close to the pyramid and one near the Nile), three smaller pyramids for Khufu's wives, an even smaller "satellite" pyramid, a raised causeway connecting the two temples, and small mastaba tombs for nobles surrounding the pyramid.
Duration: 30 minutes