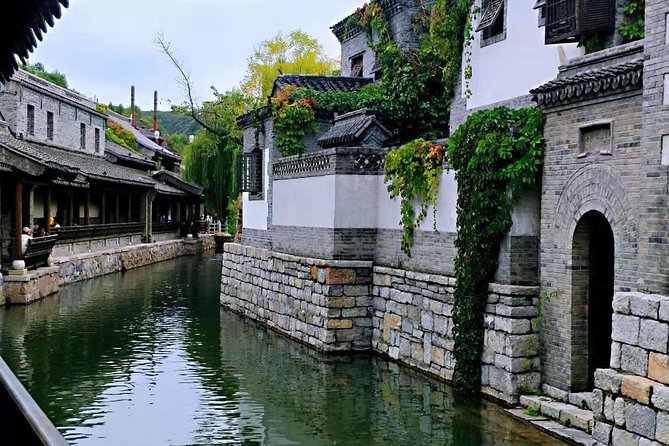 Stay away Beijing crowed tourists Great Wall Pass and bad air pollution, find your own private world of Great Wall in Simatai with seasonal romantic scenery: blooming mountain flowers are dancing with spring breeze; summer sunset sinks in Cloud Sea, autumn maples dressed the mountain as oil painting; winter snow brings Great Wall a kind of quiet gentleness.
Simatai section Great Wall is one of the few sections to retain the original appearance of the Great Wall, known as the "dangerous, extraordinary and special. If we take it as a boy, Gubei water town is like a girl, gentle and softused to be a historic military border village. Accompanied by your private guide, you will start the tour at noon; take the return cable car to see the impressive parapets and defensive watch towers with the beautiful sunset.
Guide service, entrance fees, return cable car, round-trip transportation are all included.

Gubei Water Town is a wonderful place to worth spending a couple of hours outskirt of Beijing , which covers an area of 9 square kilometers, preserved a total of 430 thousand square meters ancient architectures built in Ming, Qing Dynasty and the period of the Republic.

Your Beijing English tour guide will wait for you at hotel lobby on 12:00noon on time, then head to Gubei water town directly with around 2 - hour drive.

Once arrive at the Water Town, walk around in the old street, relax yourself by your own pace in the ancient town. You will be surrounded by the beautiful Mandarin Duck Lake Reservoir, surely have a very unique experience in the natural old town with a combination of mountains, water, ancient villages and courtyards.

Late afternoon begins to enjoy the evening view on Simatai great wall afterwards, you will take the newly built cable car and enjoy the stunning view of the wall. The entire Wall is yours, and you can explore it by your own pace. It really is an architectural wonder. once you reach at the Simatai wall you can spend leisure time on the wall. The time is quite flexible around 2 hours or more. By the end of tour you can simply take the return cable car down the wall.

You can either bring some snacks with you or you can have a dinner in the beautiful Water Town by your own cost.

Air-conditioned vehicle with a private driver

Round Trip cable car up & cable car down the wall

Hotel pick up & drop off

Entrance Tickets to the Sights

Gratuity to the guide and driver

Sun block is necessary in Summer