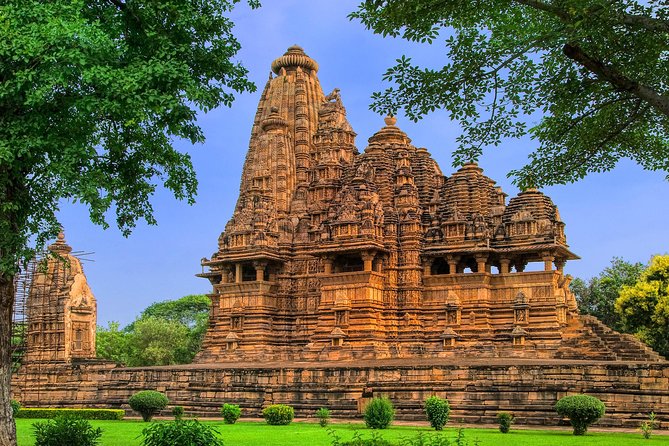 Visit the historic World Heritage Sites of Khajuraho on a Private day trip from Orchha. A personal local guide accompanies you to historical monuments while sharing stories of temple making. Enjoy the services of Private chauffeur in a comfortable car.

After morning pickup from your hotel lobbyin Orchha, you'll drive a distance of roughly 106 miles (172 km) to Khajuraho in the comfort of a private vehicle. Meet your Personal Guide on arrival in thehistoric world heritage of Western Group of Temples in Khajuraho.

A UNESCO world heritage site in central India, Khajuraho is a famous tourist and archaeological site known for its sculptured temples dedicated to Shiva, Vishnu, and Jain patriarchs. Khajuraho was one of the capitals of the Chandela kings, who from the 9th to the 11th century CE developed a large realm, which at its height included almost all of what is now Madhya Pradesh state. Khajuraho extended over 21 sq.km and contained about 85 temples built by multiple rulers from about 950 to 1050 AD. In the late 11th century the Chandela, in a period of chaos and decline, it moved to hill forts elsewhere. Khajuraho retained its religious importance until the 14th century (Ibn Batuta was impressed by it) but was afterwards largely forgotten; its remoteness probably saved it from the desecration that Muslim conquerors generally inflicted on Hindu monuments. In 1838 a British army captain, TS Burt, employed by the Asiatic Society in Calcutta, came upon information that led him to the rediscovery of the complex of temples in the jungle in Khajuraho.

Of the 85 original temples, most constructed of hard river sandstone, about 20 are still reasonably well preserved. Both internally and externally the temples are richly carved with excellent sculptures that are frequently sensual and, at times, sexually explicit. The temples are divided into three complexes-the western is the largest and best known, containing the magnificent Shaivite temple Kandariya Mahadev, a 31m high agglomeration of porches and turrets culminating in a spire.

The atmosphere in Khajuraho is far more laid-back and hassle-free, for a relaxed stay. Choose restaurant out of multiple options for lunch (on your own expense). Your personal local guide will be delighted to help finding the correct option to suit your taste buds.

After your tour, you will be dropped off atyour hotel in Orchha or at the Jhansi Railway Station by your chauffeur.

Visit to Western and Eastern Group of temples in Khajuraho.

Drive from Orchha to Khajuraho and back.

All Government taxes and Surcharge.

Anything not mentioned in Inclusions.