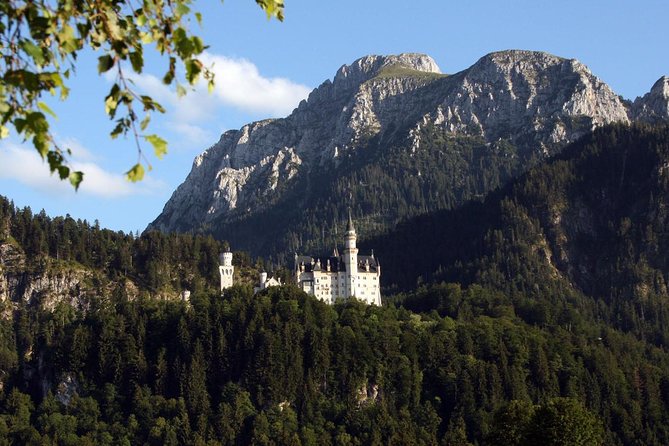 Spend the day in a fairy tale during this full-day tour of the Bavarian heartland from Munich. Travel to the mountaintop Neuschwanstein Castle (Walt Disney's inspiration for 'Sleeping Beauty'), and take a tour of the popular attraction. Visit Linderhof Castle, one of the palaces built by "Mad" King Ludwig II of Bavaria, and the picturesque village of Oberammergau. Hotel pickup, private transport, lunch, all entry fees, and a return train ticket to Munich( 2hours train ride) are all included in the cost of the tour.

At 9am, bepicked up at your Munich hotel bya comfortable minivan that seats up to eight people. Hop in, with just your private group, and drive for about an hour to the base of the Bavarian Alps. Spend an hour at Linderhof Castle, the smallest of the three palaces built by "Mad" King Ludwig II of Bavaria, exploring the grounds and the romanticgardens with their water fountain.

After a short drive, arrive at the lovely village of Oberammergau, and enjoy some free time for lunch, sightseeing, orshopping. In the afternoon, drive past the picturesque Alpsee on your way to visit the popular castles ofNeuschwanstein and Hohenschwangau. Bypass anycrowds outside with your skip-the-line tickets, and enjoy a guided tour of the castles. Around 6pm, board a train from the village of Fuessen back to Munich to conclude the tour.

for extra pers. its cost per Pers.95

Not wheelchair accessible and not for disabled persons