Constanta And Mamaia Day Trip From Bucharest - With Reviews & Ratings 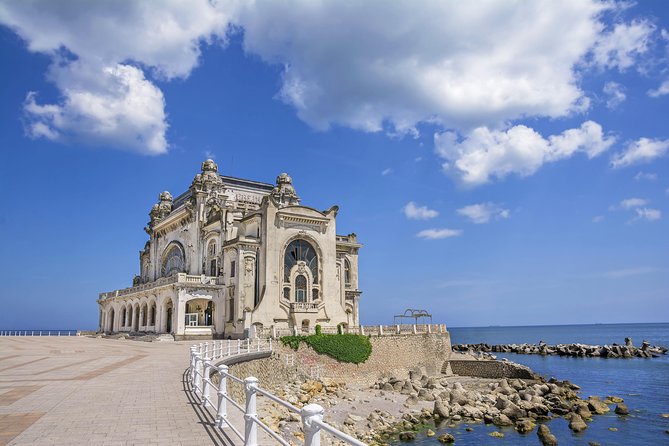 Leave the bustle of Bucharest behind and head for Romania's favorite holiday destination on a tour to the beautiful Black Sea coast. In Constanta, dig into the areas ancient history at an archaeology museum, learn about Romanian folk art traditions, and step inside the countrys largest mosque. Then, soak up some sun and relaxed local culture on the sandy beaches of Mamaia, a popular seaside resort known as the Pearl of the Black Sea.

This tour to Constanta starts early in the morning and takes you east for 230 kilometers on the A2 highway all the way to the majestic Black Sea.

Walk towards St. Peter and Paul Cathedral, an outstanding monument built at the beginning of the 19th century in Byzantine architecture. The cathedral also lies next to ruins of the ancient city of Tomis, the former name of Constanta. This will give you a glimpse of how the city was during Roman times.

The first stop will be at Black Sea Coast, where you will find the symbol of Constanta - the spectacular Art Nouveau Casino standing between the commercial port and tourist one. Built in the 1910s by the first King of Romania, the casino nowadays has become one of the main landmarks of Constanta.

We then reach Ovid Square to visit the Museum of Archaeology and History that exhibits the largest collection of vases, statuary, artifacts, and jewelry from the Greek-Roman period in Romania. Join your guide inside to hear ancient history between Romans and former Dacians.

After the Museum of Archaeology and History, take a tour of the Roman Mosaic museum where you will be seeing how a former market used to be. The Roman Mosaic section of the museum was formed in 1966 to protect the ancient history that lay within the floor and artifacts that inhabit the Roman Mosaic.

The next stop will be Folk Art Museum, where you will get to know about the traditional life in Romania through its impressive collection of costumes, household items, and religious icons.

No trip to Constanta is complete without a stop in the seaside resort of Mamaia, known as the Pearl of the Black Sea. With its fine sand and line up of restaurants, cafes, and nightclubs, Mamaia has become the popular party destination, offering both relaxations, as well as entertainment. You can sit back, listen to the sound of waves, and enjoy the afternoon sun at the beach before heading back to Bucharest.

Head towards the largest mosque in Romania, built in 1910 by our King Carol for the local Muslim community, Today, this mosque stands as testimony to the ethnic diversity and confessional tolerance. Climb the 140 steps of the minaret for a breathtaking view over the city and sea.

Leave the bustle of Bucharest behind and head for Romania's favorite holiday destination with this private Constanta And Mamaia Day Trip From Bucharest to the beautiful Black Sea coast!

Entry/Admission - The Roman Edifice with Mosaic

Youth must be accompanied by an adult