Day-Trip To Haridwar From Delhi By Train

Day-Trip To Haridwar From Delhi By Train 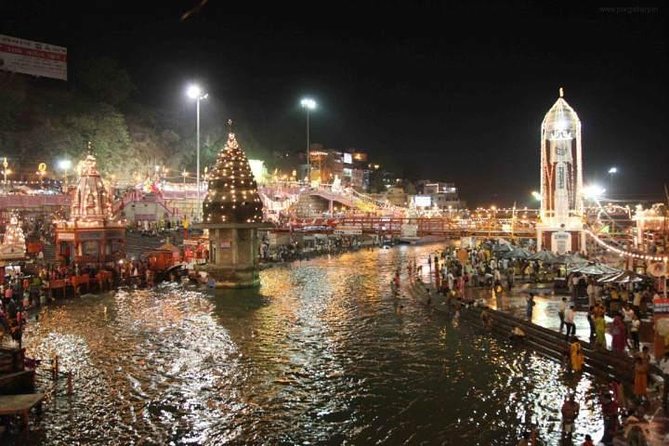 You will be picked up from your hotel or anywhere in Delhi 5:45am and transferred to the New delhi railway station to board a super fast deluxe train to the Holy City of Hardwar.

At 6:45am your train Shatabdi Exp (Train No. 12017) departs from the New Delhi railway station. Breakfast will be served on board during this 4-hour journey.

Upon arrival to Hardwar railway station at 11:22am, you will be greeted by your driver with your name on the nameplate at the main exit gate. He will transfer you to a hotel, where you will have some time to freshen up and, later meet your tour guide in the hotel lobby.

Visit to Bharat Mata Temple, This is one of the important temples of Hardwar. Har-Ki-Pauri the sacred Ghat was constructed by King Vikramaditya in memory of his brother Bhartrihari. Here a holy dip is a must for every devotee.

Lunch break, your lunch will be provided at a local restaurant.

After Lunch visit Mansa Devi Temple, The temple on the top of Bilwa Parvat is dedicated to the Goddess Mansa Devi. Here, one statue of the Goddess has three mouths and five arms while the other statue has eight arms. The rope way carriage operates between Upper Road, near the station and Mansa Devi Temple.

At the end of this tour at 5:15pm you will be transferred back to Hardwar railway station to catch your train back to Delhi, which departs at 6:15pm. The dinner will be served on board.

At 10:45pm upon arrival to New Delhi railway station, you will be greeted by your driver, who then will transfer you back to your hotel in Delhi.

No shorts or sleeveless tops allowed.

Knees and shoulders MUST be covered for both men and women.