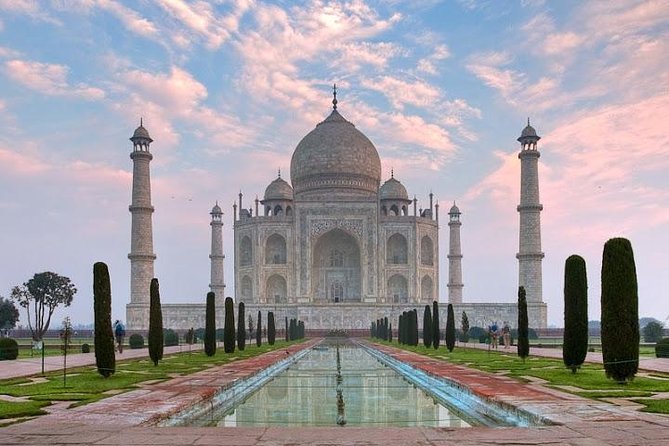 3:30am Pickup from Hotel or anywhere in Pune and drop-off Pune Airport and Flight to Delhi. Arrivalin Delhi Airport and 3 hours drive to Agra by expressway. First visit Taj Mahal and after Taj Mahal take a Lunch break. Second we visit Agra Fort and some shopping in Agra. After Agra Sightseeing drive back to Delhi and drop at Delhi Airport flight to Pune. Arrive in Pune airport and drop at your Hotel or anywhere in Pune.

Pickup at 3:30am from your Hotel or Anywhere in Pune and Transfer to Pune airport Flight to Delhi and Flight depart at 5am approx for Delhi.

Arrive at 7:30am Delhi Airport and your 3 hrs drive to Agra via Yamuna Express Highway.

Reach Agra and we visit - Taj Mahal (A Unesco World Heritage Site), No trip to Agra would be complete without a visit to this shimmering vision of domes and minarets. The world's best-known tomb stands testimony to the timeless love story of the 17th century Mughal Emperor, Shah Jahan and his wife - Queen Mumtaz Mahal. (Taj Mahal remain closed on every Friday)

Lunch Break, Lunch will be provided at the best Local Restaurant (at your own expense)

Second we visit Agra Fort (A Unesco World Heritage Site), Built by Emperor Akbar in 1565 A.D, this huge fort is made of red sandstone. The elegant buildings inside reflect an interesting synthesis of Hindu and Central Asian architectural styles. The maze of the courtyards, mosques & private chambers of the fort echo the story of the Mughal Empire.

If Time permit we enjoy shopping in Agra is known for its fabulous handicrafts, made of marble and softstone inlay work. The Mughals were great patrons of arts and crafts. Empress Nur Jahan took personal interest and was an accomplished artist herself in zari embroidery work. Agra's major handicraft products besides inlay work are: leatherware, brassware, carpets, jewellery and embroidery work.

At the end of your Agra tour, you will be transferred back to Delhi airport to return flight back to Pune.

Arrive in Pune, you will be picked up from the airport and will be dropped back off to your hotel in Pune at 10:30pm approx.