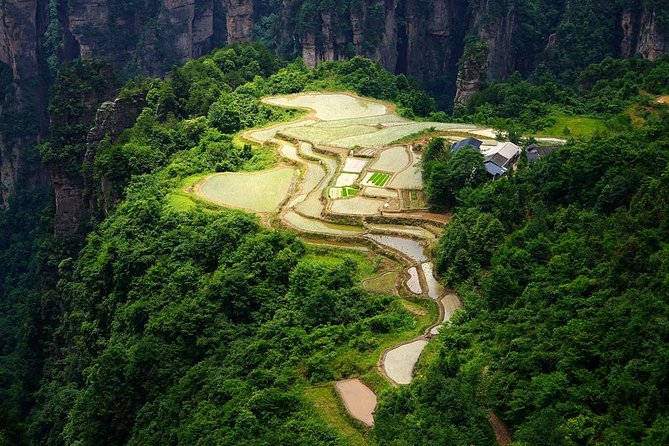 we will enjoy the unique scenery of Avatar World whichs the main fame of Zhangjiajie and its beautiful surroundings formed by various resources of nature .Moreover,This wisely-designed itinerary will promise a great&real travel to avoid the crowds for nature lovers. If interested and excited, Just join in to enjoy the charm of amazing Zhangjiajie.

Guide and driver will meet you at your hotel lobby in the morning , pirvate car transfer to Zhangjiajie national forest park .Take cable car up to visitTianzi moutain, known as the Monarch of the peak forest , the Pinetrees,theYuBi(imperialbrushes)Peaks,XihaiStoneForest,andotherincredibleviewsandsceneryawait.After that we will take a shuttle bus for 5 minutes (we can walk for 15 minutes if there is a huge line for the bus ) get the Nod-to-the-General Platform (Dian Jiang Tai), wichis in a gorge full of curling clouds, where there are many tall rock pillars of different shapes. The tallest one, sitting in the middle, is called the "emperor". In front of it is the "herald" who is reading an imperial edict to the "soldiers". The two "prime ministers" are "bending down" and stand on the left and right. It is said that the emperor of Xiang once reviewed his troops there.

Then take a shuttle bus get to(Laowu Chang ) is an undeveloped part of Zhangjiajie National Forest Park, between Yuanjiajie and Tianzi mountain. It is best reached by local hired van from Yuanjiaje, as it is well off the ordinary travel route.The scenery in the area is incredibly beautiful and overwhelming. Sun rise in Laowuchang is considered by photographers to be the must-shoot scene in Zhangjiajie.

We can also see the 'Sky Field Garden'(Kongzhong Tianyuan) is a small area of paddy fields, seemingly hanging on an outcrop surrounded by Zhangjiajies typical peaks. The paddy fields are farmed by local ethnic people.After that we will get to the Bridge viewing platform.

Takearideinafamouselevator to descend the mountain, the back to hotel . Finish your unforgetble trip .

Passport name, number, date of birth and country is required at time of booking for all participants

If the reality is not promising it, the itinerary can be adjusted by the guide for bettering the travel experience. If it increases the tour cost on extra parts, it would be on your side. But the choice is still yours to follow the original or the revised one.