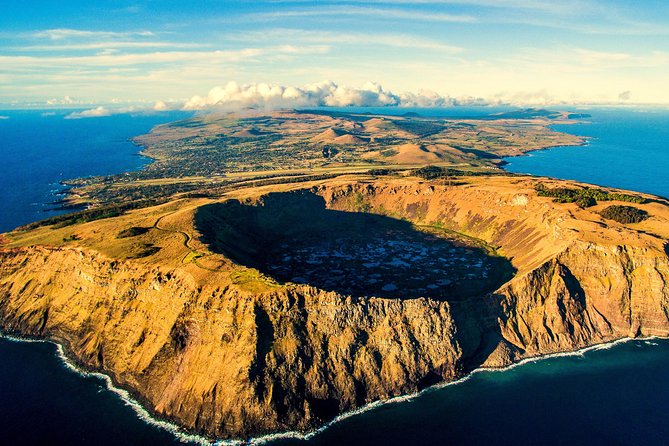 Enjoy a full-day private tour of Easter Island learning about the historical Birdman Cult competition and seeing many stunning highlights of the island. Caves, beautiful ocean vistas, the huge volcanic crater of RanoKau, the top knot quarry, and some of the most beautiful rock-work on the island await your discovery on this breathtaking journey. Enjoy hotel pickup and drop-off and a private guide that will teach you about the culture and history of Easter Island and the cult that partook in the Birdman competition.

Begin your private 6.5 hour tour with hotel pickup service at the chosen time of departure.

Begin with a visit to the Ana Kai Tangata, a cave with paintings on the roof and a name that reflects the cannibalism which took place on the island during the warfare period. See the Rano Kau, a volcano with a panoramic view of the island which plunges 200m (656ft) below to a beautiful lake.

See the ceremonial village of Orongo where, during the 18th and 19th centuries, one of the most interesting political ceremonies took place annually as different tribes competed to become the leader of the island. In breathtaking sports event that involved climbing down cliffs, swimming out to some islets off the coast, the islanders came to this beautiful part of the island to see who would be their next king.

Additionally, become intrigued with the Vinapu site, where you will see some of the island's beautiful rockwork, reminiscent of that found in the great Inca civilization of South America.

Make your way to Puna Pau quarry from which the large scoria (red, cindery, basaltic lava stone) where adornments that were fitted on the heads of many statues were taken. Then discover the Ahu Akivi, a restored site of seven statues. It is said to be the representations of the first seven explorers who came to the island. These seven moai are the only group of statues looking out to the sea.

Lunch is not included on this tour, but there will be opportunities to stop and get food along the way if you find yourself hungry.

Like many volcanic islands, Easter Island is riddled with lava tubes. Ana Te Pahu is one of the more extensive networks found on the island that you will see. Learn how the ancient Rapa Nui people used these cave networks to live, collect water, plant vegetables and hide from aggressive visitors from the outside in the 18th and 19th centuries.

When the tour is complete, you will be dropped back at your hotel.