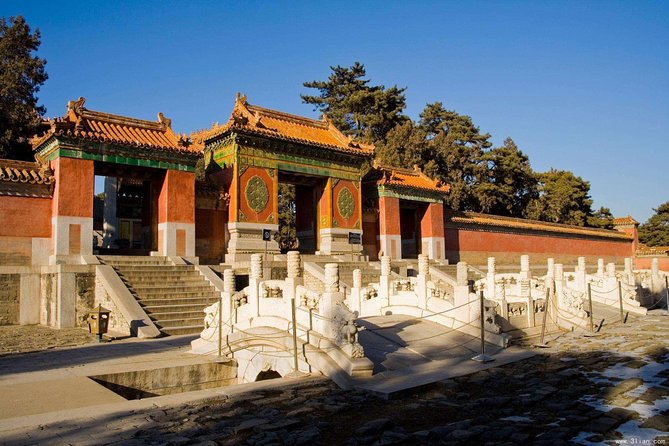 Spend full-day with a professional tour guide to explore the mesmerizing and charming Eastern Qing Tombs that is the largest and best preserved extant tomb complexes for royal families in China. The tour lasts 8 - 9 hours, guide and hotel transfer are inclusive.

Accompanied by a professional guide in the morning from your hotel to visit the charming Eastern Qing Tombs. The last Dynasty Qing is ruled by Manchurians from north eastern China. Their tombs are designed to overcome the splendor of the previous dynasty Ming. The stone carvings and Tibetan Buddhism reflection in the tomb of the most influential Emperor Qianlong, the unimaginable luxury in the bomb of notorious but most powerful woman Dowager Cixi, and the massive tomb robbery by warlords in 1920s brought it to everyones attention.

Longer distance than the Ming tombs make it less visited so you will enjoy the peaceful time reading the history.

Relax on the 2 - 2.5 hours journey from the Beijing city to the East Qing Tombs and return to your hotel after the tour.

Please note: there are no good restaurants near the Tombs, only some village restaurants nearby which are not very tasty and clean enough, we suggest youd better prepare some fast food or snack for lunch by your own in advance.

Air-conditioned vehicle with a private driver

Hotel pick up & drop off

Entrance Tickets to the Sights

Gratuity to the guide and driver