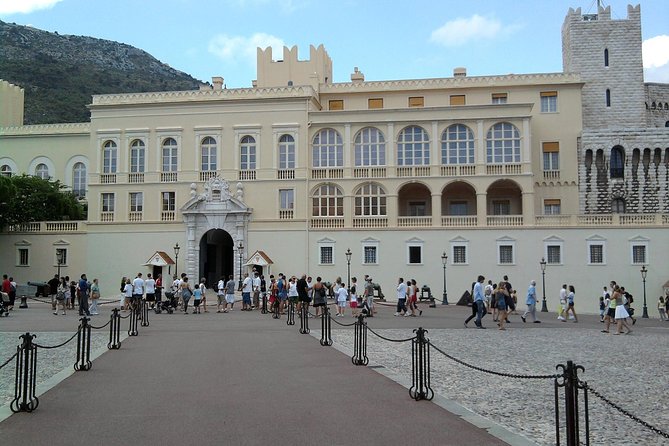 Monte Carlo: Be driven on the most famous Formula1 race track. Try your luck at the renowned Casino of Monaco. Why not take a break in Caf de Paris, where you can sit down and enjoy all beautiful cars.
Monaco: Visit this beautiful old town (the capital) built on a rock, very rich in history. Admire the Castle. Jean Cousteau oceanographic museum, with aquariums and fishes.

You will start your pleasant sightseeing tour with a pick-up from your hotel or any other specified place.

Your first visit will be the city of Cannes. Renowned for its beautiful sandy beaches and its walk: La Croisette. Here you will find exclusive boutiques and Nice restaurants, cafes. Become a celebrity over a day, pose on the red carpet at the Cannes pride, Le Palais de Festival the film.

Your journey continues on the beautiful coastal road to Antibes. Once there, you are greeted by one of the world's most renowned boat harbor, Port Vauban. Here you will find everything from small boats to some of the largest yachts ever built. Antibes is surrounded by a huge wall, inside, we visit a wonderful market which is held every day except Mondays. There is everything from spices, vegetables, candy, seafood, flowers, perfume essences, and much more. Just around the corner we have a beautiful church you can visit, as well as a very interesting museum with art by the artist Picasso.

Move on to Nice, a beautiful city along the Mediterranean. Still a beautiful promenade: the Promenade des anglais. A visit to the old town, with a lovely flower and fish and seafood market. Stroll around the narrow shopping streets. Why not enjoy a coffee in the sun. It is full of beautiful old buildings here such as the Opera or the Palas de Justice.

Your excursion continues coast road to Eze. Once again another medieval village, but this time high up on a hill. It is so beautiful here, the small winding streets without cars but many cozy cafs, restaurants and boutiques. If you make the effort to walk up to the top, you will find the remains of the castle that once stood there - and today it is a fabulous exotic garden. On the way down admire arts and if you want, even visit a beautiful little church.

Next, your guide will take you for a guided visit at the famous perfume factory Fragonard. Here you can take part of its long history of how to produce the good scents.

Monaco and Monte Carlo is the next stop. Visit the majestic castle where the Prince of Monaco and his family live. Stroll around in the beautiful capital with its large white beautiful cathedral. Here you will also find the Maritime Museum, where Cousteau worked. With you guide, you will take a tour of the so well-known race track for Formula One to be held here in Monaco every year. Lastly, visit Monte Carlo. Luxury and glamour, beautiful buildings and exclusive boutiques. Just stroll around in this beautiful environment is a pleasure. Monte Carlo and its pride: Casino and the Caf de Paris is a must to visit.