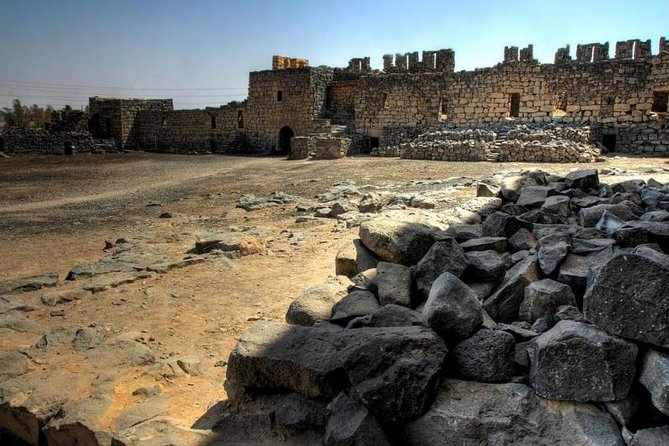 Look beyond Jordans most celebrated attractions to see some lesser-known historical treasures on this private Islamic Desert Castles day trip from Amman. Head east in this long trip to Al-Azraq, a castle that Lawrence of Arabia once used as a headquarters, and then explore the fresco-painted masterpiece of Amra and Kharaneh Castles. Finish at Aljoun, a hilltop medieval fortress built to defend against the Crusaders. Your tour includes private leisure transportation, hotel pick up and drop off, and entrance fees.

After pick up from your central Amman-jordan">Amman by private, air-conditioned vehicle, relax as you journey out of the city and into the desert plains of eastern Jordan. Drive with your friendly informative driver to experience the fascinating Desert Castles. The region is speckled with 7th and 8th century castles, many within a 15-minute drive of each other, that were originally built by the Caliphs of the Umayyad dynasty as rural retreats and hunting lodges. Hear tales about this powerful dynasty, the first Muslim rulers of the Arab kingdom, including fascinating snippets about their extravagance and debauchery. As you travel, feel free to tell your driver if theres a castle you want to see more of or another castle youd like to visit, at your own expense. Your tour is private, so the itinerary can be tailored to suit your interests. After about 1 hour on the road, pull up at UNESCO-listed Qasr Amra, one of east Jordans most famous castles. Once a hunting palace of the Umayyads, this splendidly restored edifice is graced with 8th-century frescoes showing decadent scenes of nude women, wine and parties. Continue to Qasr Al -Kharana, an imperious 2-level fortress standing in a huge plain. Thought to have been built on Roman foundations, this evocative castle exudes intrigue and displays a rich array of Mesopotamian, Arabic, and Greek architectural influences. Finally, head for Qasr Al-Azraq, originally an Umayyad hunting retreat and once used as a headquarters by T.E. Lawrence, the 20th-century British soldier and Arab Revolt leader perhaps more famously known as Lawrence of Arabia. Wander around the sun-burnished courtyards, towers and mosque and learn how Lawrence based his operations here during 1917 to 1918. After exploring here, relax on your ride back to Amman where your experience finishes with a hotel drop off.

Having explored here, continue to the12th-century Castle of Ajloun, built in the time of Saladin to defend against Crusader armies. Head inside this semi-intact hilltop fortress, and roamthe rambling corridors and staircases. See the murder holes through which occupiers could pour hot oil or pitch on invaders, and admire the stunning views over the lush hills of the Jordan Valley from the towers. Then, reconvene with your vehicle and relax on your long ride back to Amman where your trip ends with a hotel drop off.