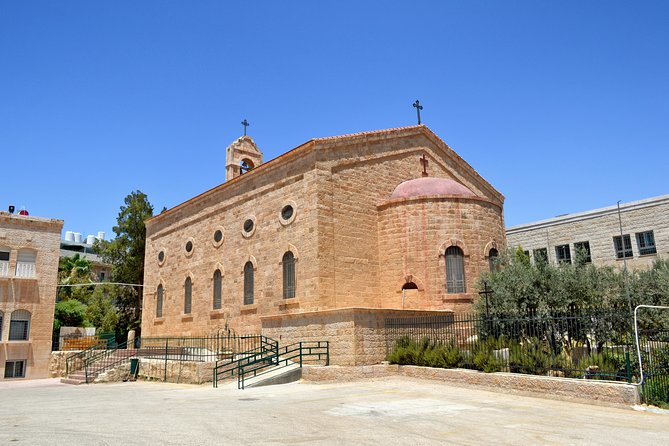 Escape bustling Amman for the day and see three of Jordans most important religious and historical sites on a private 8-hour trip. In addition to viewingthe famous Mosaic Map at Madaba, tour Mount. Nebo, where Moses is thought to have seen the Promised Land, and visit Bethany, Jesus believed baptism site on the River Jordan. Your package includes guided tours of Madaba and Mount nebo with entrance fees and private round-trip transportation.

Depart your Amman hotel by a private leisure air-conditioned vehicle with English Speaking Driver who doubles as your guide, and set off on your private tour, traveling to Madaba the city of mosaics. After around an hour, arrive at Saint Georges Church, the 19th-century basilica in the heart of the town. This famous church houses the Madaba Mosaic Map, an intricately detailed floor mosaic of the Holy Land believed to have been created in the 6th century A.D. Admire the church interior and marvel at the stunning floor map, with its evocative depictions of ancient Jerusalem, Jericho, and lands including the Lebanon, Sinai, and Egypt. Continue to Mount nebo, the hill where Moses is believed to have gazed out over the Promised Land. Absorb the sweeping views over the Dead sea and Jordan Valley, and visit the Byzantine church on the summit to see its fabled mosaics. Behold the luminous pieces of early art and their vivid recreations of animals, people, and hunting winemaking scenes in this beautiful Franciscan Monastery.

On route, soak in views of Jordans barren landscapes, and pull up at Bethany Beyond the Jordan River, known as El-Maghtas in Arabic, the site on the eastern bank of the river where its believed Jesus was baptized by John the Baptist. Meet up with a local guide, and take a tour of the riverbanks and key excavated ruins,learning how the sitewas sanctifiedas the place of Jesus baptism by the Vatican and a visit by Pope John Paul II in 2000. Drink in the powerful sense of spirituality, and see the remnants of Roman and Byzantine churches, caves, wells, and baptismal pools. As you walk, listen as your guide explains why archaeologists believe that it was here that John the Baptist lived, preached, and performed baptisms. Hear more about this famous Christian pilgrimage spot and how it is held holy in all three major religions Christianity, Judaism, and Islam for being the believed site of the Prophet Elijahs ascension to heaven. Afterward, reconvene with your driver and return to Amman, where your tour ends with a hotel drop-off. Please note: theBethany in this trip should not be confused with Bethany in Jerusalem, where it's believed that Mary Magdalene lived and Lazarus rose from the dead.

Entry/Admission - The Church of Saint George