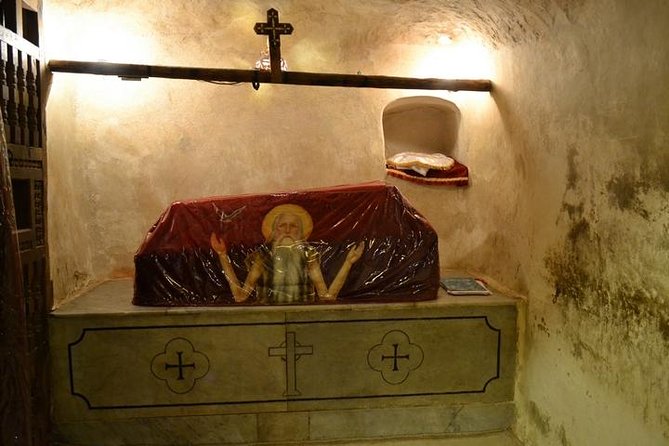 Discover Egypt's early Christian history and Coptic heritage with this full-day tour from Hurghada to the monasteries of Saint Anthony and Saint Paul. Built in the fourth and fifth centuries AD, they are Egypt's oldest Christian monasteries, dating back to the time when monks first began to settle along the Red Sea. Tour includes lunch.

Grab forty winks in your comfortable, air-conditioned vehicle after you leave Hurghada at 3:30am for the 3-hour drive north to Saint Paul's Monastery. Set against the dramatic cliffs of the Eastern Desert plateau, the monastery is home to caves, where the hermit Saint Paul lived, as well as churches covered with stunning frescoes. Your private guide will explain the meaning of the site in Coptic Christianity.

Next, drive south for half an hour or so to the Monastery of Saint Anthony, the oldest monastery in Egypt and one of the oldest monasteries in the world. Established in the fourth century AD, it's home to several striking churches, a library, and the tiny cave where Saint Anthony lived as a hermit. It's still a working monastery where Egypt's Coptic Christians come for religious retreats.

Enjoy lunch and the dramatic desert scenery before returning to Hurghada. You'll arrive at your hotel at around 4:30pm.