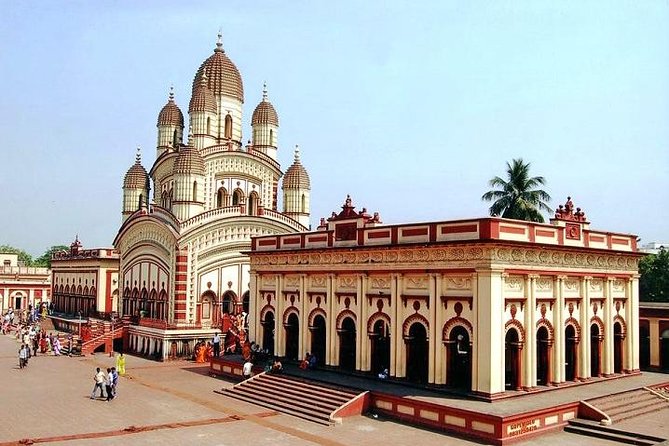 Kolkata, aptly known as the City of Joy, is one of the vibrant cities of India; enjoying every moment of life. As one of important seats of the British rule, it consists of several British monuments. It is also the centre of Missionaries of Charity, built by Mother Teresa.
A city of culture and tradition, it has several temples dedicated to goddess Kali while Durga Puja is the biggest festival celebrated here.

Itinerary
This is a typical itinerary for this product
Stop At: St. Paul's Cathedral, 1A, Cathedral Road, Kolkata (Calcutta) 700071 India
The cathedral was built to replace St. John's Church, which had become too small for Calcutta's growing European community; by 1810 there were 4,000 British men and 300 British women in Bengal.
Duration: 5 minutes
Stop At: Mother House A J C Bose Road, Kolkata (Calcutta) 700016 India
Firstly we will take you to visit the Mother Teresa's House to view her tomb and then to Nirmal Hriday, The Place where Mother Teresa had lived with her sisters to served the peoples.
Duration: 30 minutes
Stop At: Indian Museum (Jadu Ghar), 27 Jawaharlal Nehru Rd, Kolkata (Calcutta) 700016 India
The Indian Museum in Kolkata also referred to as the Imperial Museum at Calcutta in colonial-era texts, is the ninth oldest museum of the world and the largest museum in India and has rare collections of antiques, armour and ornaments, fossils, skeletons, mummies and Mughal paintings of 1600 ce.
Duration: 30 minutes
Stop At: Victoria Memorial Hall, 1 Queen's Way, Kolkata (Calcutta) India
And then will take you to visit to the majestic Victoria Memorial; a marble structure built in memory of Queen Victoria. It is a blend of Mughal and British architecture. At present it is a museum which exhibits paintings, miniatures, statues and books, through which people can get an indepth knowledge of Indian history.
Duration: 45 minutes
Stop At: Birla Temple, Ashutosh Chowdhury Road 29 Ashutosh Choudhury Avenue, Kolkata (Calcutta) 700019 India
Spread on 44 kathas of land, this temple built of white marble bears resemblance to the renowned Lingaraj Temple of Bhubaneswar. Birla Mandir also showcases pictorial depiction of scriptures of Bhagavad Gita in its stone engravings and some intricate Rajasthani temple architecture.
Duration: 20 minutes
Stop At: Kumartuli, Hatkhola, Kolkata (Calcutta) India
Kumortuli is a traditional potters quarter in northern Kolkata, West Bengal. The city is renowned for its sculpting prowess, which not only manufactures clay idols for various festivals but also regularly exports them
Duration: 30 minutes
Stop At: Kalighat Kali Temple, Kalighat Road, Kolkata (Calcutta) India
Kalighat Kali Temple is a Hindu temple in Kalighat, Kolkata, West Bengal, India dedicated to the Hindu goddess Kali. It is one of the 51 Shakti Peethas.Kalighat was a Ghat sacred to Kali on the old course of the Hooghly river in the city of Kolkata.
Duration: 45 minutes
Stop At: Prinsep Ghat, Strand Rd, Kolkata (Calcutta) India
Prinsep Ghats is a ghat built-in 1841 during the British Raj, along the Kolkata bank of the Hooghly River in India. The Palladian porch in the memory of the eminent Anglo-Indian scholar and antiquary James Prinsep was designed by W. Fitzgerald and constructed in 1843.
Duration: 20 minutes
Pass By: BBD Bagh, south of Howrah Bridge also known as Lal Dighi, Kolkata (Calcutta) 700001 India
Drive Pass through Dalhousie Square:-
General Post Office, Shaheed Minar, Eden Gardens, Akashvaani Bhawan, Howrah Station, Writers Building, Governors House, Ghat of Ganges, High Court, Maidan, Town Hall, Fort William, Race Course
Pass By: Howrah Bridge, Jagganath Ghat 1, Strand Road, Kolkata (Calcutta) 700001 India
Drive Over: - Howrah Bridge and Vidyasagar Bridge.

Most of Museums & Monuments will remain closed on Monday.