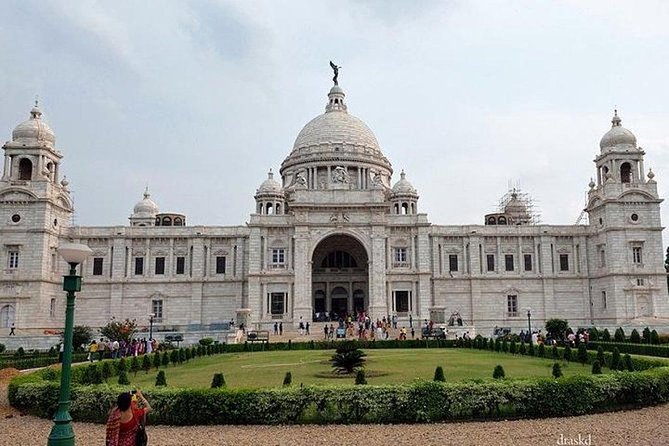 Discover the vibrant city of Kolkata on a private tour of the city. See key landmarks such as Mother Teresas house to view her tomb, the Howrah bridge, the Marble Palace, and much more as you drive around in a private, air-conditioned vehicle. Learn about the history of India, from ancient times to its British occupation to present-day, over the course of the day.
Explore the highlights of Kolkata on a private sightseeing tour
See the Howrah bridge, Marble Palace, and Victoria Monument
Learn about the history of India as you explore the city
Enjoy a personalized experience with a private guide and vehicle

Itinerary
This is a typical itinerary for this product
Pass By: Marble Palace Kolkata, 46 Muktaram Basu St off Chittaranjan Ave, Kolkata (Calcutta) 700040 India
After breakfast in the Morning , our representative will pick up you at 9.30 AM and Proceed for Full Day Sightseeing Tour of Kolkata City ........Accompanied with Guide.
Pass By: Mother House A J C Bose Road, Kolkata (Calcutta) 700016 India
Firstly we will take you to visit the Mother Teresa's House to view her tomb and then to Nirmal Hriday, The Place where Mother Teresa had lived with her sisters to served the peoples.
Pass By: Howrah Bridge, Jagganath Ghat 1, Strand Road, Kolkata (Calcutta) 700001 India
Afterwards will take you the famous Howrah Bridge, also known as the Rabindra Setu. It is the third longest bridge in the world and remains busy almost throughout the day. Built over the sacred Ganges, the river looks beautiful from the bridge.

Pass By: St. John's Church, 2/2 Council House Street Opp Dewars Garage, Kolkata (Calcutta) 700001 India
And Then we will move towards the oldest building of the British rule in the city, the St. Johns church, Near the church lies the grave of Job Charnock, who is the founder of the city. It is a stone and brick structure with beautiful interior; built of wood and marble. You can see the large paintings of the Last Supper on the walls. It is also significant as it contains the round table on which the Charter of Calcutta was signed.

Pass By: Marble Palace Kolkata, 46 Muktaram Basu St off Chittaranjan Ave, Kolkata (Calcutta) 700040 India
Our next trip is to the exquisitely designed Marble Palace. Lying in the midst of a lush green meadow with artistic sculptures, this building is a treasure house of antiques, like curios from China and paintings of Ruben.

Pass By: Victoria Memorial Hall, 1 Queen's Way, Kolkata (Calcutta) India
then will take you to visit to the majestic Victoria Memorial; a marble structure built in memory of Queen Victoria. It is a blend of Mughal and British architecture. At present it is a museum which exhibits paintings, miniatures, statues and books, through which people can get an indepth knowledge of Indian history.

Pass By: Marble Palace Kolkata, 46 Muktaram Basu St off Chittaranjan Ave, Kolkata (Calcutta) 700040 India
At Last we will take you to visit and Stroll around the New & Old Market in Kolkata City , there you can enjoy and explore the life style of the localities, the city is known for its colourful cotton and silk saris. Afterwards our Representative will Pick you and drop off you at your designated place in Kolkata. As the one day tour comes to an end, our representative escorts you to your hotel.